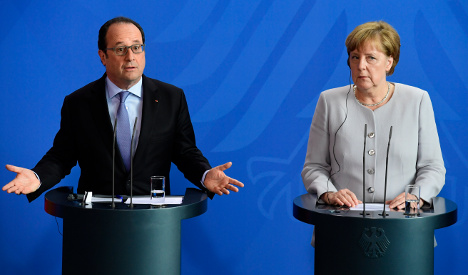 The leaders of Germany, France and Italy vowed on Monday “a new impulse” for the EU as it reels from Brexit and told London that the bloc would make no deals before Britain formally decides to leave.

The EU's three most populous continental nations signalled that the UK must first take the plunge of invoking Article 50 to exit before it can negotiate its future trade and other ties with the bloc.

Chancellor Angela Merkel — hosting French President Francois Hollande and Italian Prime Minister Matteo Renzi in Berlin — said that “we agreed on this, that there will be no informal or formal talks on the exit of Britain until an application has been filed to leave the European Union”.

British finance minister George Osborne had said earlier that his country should only activate Article 50 when it has a “clear view” of its future relations with the bloc.

Merkel also stressed that “there must be no period of uncertainty” that is prolonged, and that the EU must counter “centrifugal forces” in other EU countries pushing to leave the union.

Hollande, somewhat more bluntly, urged Britain to “not waste time” in triggering the process to leave, arguing that it was to all parties' benefit to move forward quickly.

In a joint statement the leaders said they “regret that the United Kingdom will no longer be our partner within the European Union” but said confidently that the EU “is strong enough to find the right answers”.

On the eve of a Brussels summit, they urged steps among the remaining 27 members to jointly boost cooperation on internal and external security as well as the economy and programmes to help youths.

Merkel vowed that the remaining members would push on with the European project, saying that “we will suggest to our (EU) colleagues that we should put in place a new impulse … in the coming months”.

She called for unity and urged a new collective push for cooperation in areas that included “defence, growth or jobs and competitiveness”.

The focus should be on internal and external security, counter-terrorism and protecting the EU's external borders, she said, adding that “a second focus is on the economy, growth and competitiveness”.

Renzi said that “it is clear that we have to respect the sovereign decision of the British people but at the same time, there has to be a strategy for the months to come”.

“We are a big family and we need to reassure the members of the family. But there is also a great need to remodel the European project in the coming years… Things need to move forward.”

In their joint statement the three leaders said they would push for greater cooperation on security issues, including “developing our European defence and taking necessary engagements on joint operations”.

They also said Europe must “keep its promise on delivering prosperity to its citizens”.

To do so, eurozone nations should “take new steps if necessary to reinforce growth, competitiveness, employment, and convergence including in the social and fiscal areas”.

A key target group would be to reduce massive youth unemployment in several EU nations, they said, stressing that “Europe would not succeed unless it gives hope to its youth”.

The proposed reforms would be the subject of a September summit, with a view to the implementing them within six months.