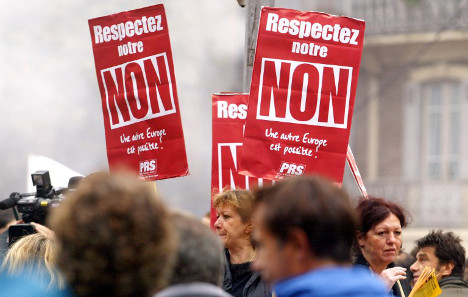 Demonstrators hold signs reading 'Respect our No, an other Europe is possible' after the EU constitution which was rejected in a referendum in 2005. Photo: AFP
The shock result of last week's referendum has plunged the UK into political and economic chaos.
With no apparent plan for the future out of the EU, many Remain voters and those Leave voters suffering from “Bregret” are now wondering if the best thing to do is just ignore the result of the referendum.
While this may seem outrageous, given that it's only been days since the votes were cast, there is history when it comes to ignoring divisive referendums on the EU. Not least in France.
Here's what happened in the French referendum, and how France dealt with it.
The year was 2005, and the French were faced with a referendum on whether to ratify the European Constitution.
Voters were specifically asked: “Do you approve the bill authorizing the ratification of the treaty establishing a Constitution for Europe?”
Then-president Jacques Chirac is widely reported to have thought that a victory would be an expression of confidence in him by a pro-EU public, and he called for a referendum. Nine other EU countries also called for a referendum, although most (including the UK) didn't go through with it.
But the bill prompted a bitter debate in France that split political parties on both sides and left 55 percent of the voters rejecting the bill after a turnout of around 69 percent.
A poll carried out by Ipsos after the vote found that 52 percent of “no” voters said that their deteriorating daily life conditions played a part in their choice, 40 percent said that the draft constitution was “too liberal”, and 39 percent of no voters said they had voted “no” hoping for a better treaty.
But no matter the reasons why they voted, the shock result sent tremors across Europe just like last week's Brexit vote. Jacques Chirac. Photo: AFP
The move was described as a political earthquake at the time, not least considering France's role as one of the EU's founding members.
Days later, the Dutch rejected the bill in a referendum of their own. Even though nine of the EU member states had ratified the treaty, European leaders eventually had to accept that the referendum results killed off the constitution.
The EU member states were left having to come up with a plan B, prompting “no” voters in France to stage rallies across the country calling for their vote to be respected.
By this point, president elections were on the way in France and presidential candidate Nicolas Sarkozy pledged a re-negotiation without a referendum. He became president in 2007.
In the following months, the EU member states repackaged the constitution into what became the Treaty of Lisbon in 2009, a document which, while not a constitution, was considered more or less the same as the one which the French had fairly resoundingly rejected.
Sarkozy presented the treaty to the French parliament and it was adopted.
Many French voters, especially on the left, believed their wishes that they had clearly presented in 2005 had been ignored.
Fabien Chevalier, the president of the pro-EU group Sauvons l'Europe, said that the 2005 vote broke the momentum of the integration of the EU.
“Europe has the role of the bad cop, who has to respect the rules that are adopted by the member states. It's not surprising that people don't care anymore.”
This is considered to be a key moment in France's worsening view of the EU over the following years.
“The referendum marked a break. People voted, and there has been a refusal to accept the decision of the people. Disillusionment settled in,” said Marie-Georges Buffet, the leader of the French Communist Party from 2001 to 2010.
For the next decade, opinion polls showed that the French were falling out of love with the EU, to the point where a majority would like a referendum on Frexit.
Indeed, a survey from the CSA Institute last year found that some 67 percent of the French don't support the EU.
So perhaps it would not be so wise for British politicians to ignore the referendum. Worse may follow years down the line.