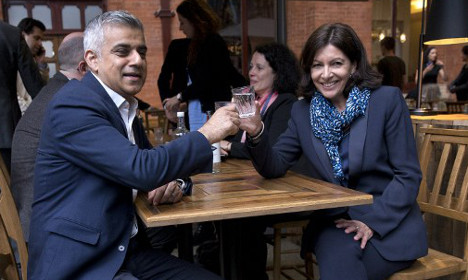 Mayor of Paris Anne Hidalgo and her counterpart in London Sadiq Kahn have united and vowed to bring the two capital cities closer together.

Days after the UK voted to leave the EU the two mayors issued a rallying call promising that whatever the result London and Paris would step up cooperation.

“Despite the outcome of the EU referendum, our two cities must now work more closely together than ever before in order to deliver on our shared agendas,” read a joint letter from the pair published in the French and British press.

Some in France have suggested that Paris could benefit from a Brexit if London firms and banks decided to up sticks and relocate themselves on the other side of the English Channel.

While some French politicians have already stoked the flames by suggesting companies and investors would be welcome in London, Hidalgo and Khan, both left wing mayors, prefer to stress cooperation rather than competition between the two cities.

“As the mayors of London and Paris, we are today committing to work ever more closely together in order to build far stronger alliances between cities across Europe and around the world,” said the mayors.

The statement marks a change of tune between those in charge of the two cities.

Previously the relationship between Hidalgo and former London mayor Boris Johnson wasn't quite as amicable .

Johnson angered Paris officials when he offered to roll out the red carpet for French bankers fleeing high taxes in France.

And in one interview Hidalgo jokingly described London “as a suburb of Paris”, before stressing how the French capital was better than the UK's.