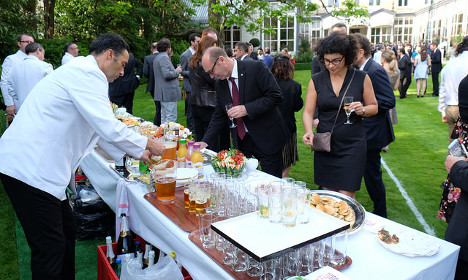 Brits celebrate the Queen's 90th birthday at the British embassy in Paris. Photo: UK in France/Flickr
There are more questions than answers in the wake of Friday's historic Leave vote, not least among British business owners in France.
But the official advice is to continue as normal, at least according to Olivier Campenon, the new president of the Franco-British Chamber of Commerce.
“The message they should give to the clients and employees is that it is business as usual. We need it to continue because at the moment nothing is clear,” he told The Local.
“A lot of expats have contacted us wondering if they will need visas to stay in France and the French in London are also worried, but from a business situation it's slightly different and they need to make sure they don't panic.
“Let's leave the political questions to the politicians and let's carry on doing business.”
He added that anyone thinking of setting up a business shouldn't be deterred, and advised them not to overreact about currency conversion concerns.
“I'd like to be optimistic that good sense and good business sense will mean that in the future there will continue to be free trade between France and the UK as exists today,” he said, adding that the Franco-British Chamber of Commerce would continue to defend the interests of its members. Photo: AFP
The advice might not do much to ease the concerns of those with businesses, however.
Micro entrepreneur Lucy Heber-Hall said she couldn't help but think of the “nightmare scenarios” that come with the UK voting out.
“I have absolutely no idea at present how the Brexit vote will affect my status as micro entrepreneur and if in fact I'll be allowed to continue with it or not,” she told The Local.
Potentially losing her business, she said, could have serious consequences for her family.
“What on earth happens if I can't continue my business or find a little job to tide us over because I need a work visa? As far as I'm aware, in order to get a work visa you need to be quite 'high' up in the professional status like a nurse or a doctor.”
Some small business owners have seen effects already, including Steve Fleming, a registered electrician in the Hautes-Pyrénées region of south western France.
He said his business took its first hit over the weekend when a British customer postponed a job citing fears of the value of the pound.
“He earns all his money in pounds and didn't want to make transfers into euros at the moment because the pound is so low. Now everything is on hold,” he told The Local.
Fleming, who has been in France for nine years, said he was concerned that a weak pound will mean fewer Brits moving to France, and therefore fewer customers.
“A lot of my customers are expats, the ones who live here full time are usually retired and living on their UK pension. They will probably be more careful about spending money from now on,” he said.
“I've seen this before, they'll start saying: 'Can I leave it a few weeks before paying'?”. Will fewer Brits move to France? Photo: AFP
Sas Edwards, a British financial adviser who has called France home for 23 years, said she was concerned that the French may treat Brits differently post Brexit.
“I'm worried that I might lose credibility as a British person when trying to give financial advice to the French,” she told The Local.
“It will all come down to the question of how the French will portray the British in France. Will we be immigrants who are taking away jobs, or will we be Europeans who have been living here for years? We can only wait to find out.”
Others are less concerned about any effect on their business.
Mike Spencer who runs a bed and breakfast in the Aquitaine region to the south west of France said he had no immediate concerns about Brexit from a business perspective.
“There could be a short term dip in the number of British tourists, who won't have enough money to visit because of the volatile exchange rate, but that's about it,” he told The Local.
He said that small leisure and tourist companies in France like his deal in euros and generally have a mix of nationalities visiting, so the Brexit vote is unlikely to be felt too much.
In the longer term, he said that changes such as a cut in the number of low-cost flights out of the UK could see dips in tourist numbers in the region.