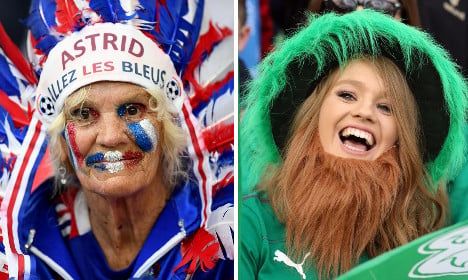 Irish football fans have stolen everyone’s hearts during the Euro 2016 in France for their joyfulness, good humour, and willingness to clean up after themselves.

As Les Bleus prepare to face off against the Boys in Green on Sunday, here are five things you probably didn’t know about France and Ireland.

The French may love to laugh at the Americans and their “frenemies” the English, but for the Irish, they have a bit of a soft spot. You may have met a French person who spent their Erasmus year in Ireland. And just take a stroll around Paris and you’ll pass an Irish pub about every five minutes.

Ahead of the big match, here’s what you should know about France and Ireland…

It’s no coincidence that the French flag and the Irish flag look so similar.

It goes back to 1848 when Thomas Francis Meagher, leader of Irish rebel group Young Irelanders and who was inspired by France’s revolution, travelled to Paris to congratulate the French on overthrowing King Louis Philippe I. There, a small group of French women gifted him a tricolor of orange, green, and white, made of French silk. From March of that year, the flag appeared side-by-side with the French tricolor in Ireland.

But the Irish tricolor didn’t actually become known as the national flag until the Easter Rising of 1916 when it was raised above the General Post Office in Dublin.

Off with their heads! Guillotine used in Ireland before France

The image of death by guillotine is synonymous with the French Revolution and Marie Antoinette.

But, nobody is sure exactly when and where the guillotine originated, and according to Holinshed’s Chronicles, the Irish were chopping off heads nearly 500 years before the French.

The text cites use of the guillotine as an execution method in County Galway in 1307, whereas the first guillotine execution in France wasn’t until 1792. An Irish writer was a hero of the French resistance

Samuel Beckett was not only a literary hero but also a sort of war hero.

The “Waiting for Godot” author received the “Médaille de la Résistance” for his bravery during the Nazi occupation of France in 1940. He worked as courier and was nearly caught by the Gestapo several times.

After two years his unit was betrayed and he and his wife were forced to go into hiding in a village in the south of France. Even then, he continued to help the Resistance by storing weapons and military equipment in his backyard.

He even has a street named after him in Paris.

Paris has the largest Irish cultural centre in Europe

Previously a seminary, the Centre Culturel Irlandais in the Latin Quarter of Paris is the largest Irish cultural centre in Europe. The Irish college was closed down in the early 20th century, to be turned into the Irish Cultural Center in 2002.

Those who want to get a little Irish culture in the center of Paris can visit the centre for traditional Irish music and dance, Irish cinema, and author readings. In fact, French is the most common foreign language taught in Ireland, being learned by more than 180,000 people.

Now what do you think — will France and Ireland be able to stay friends after the highly anticipated match on Sunday?