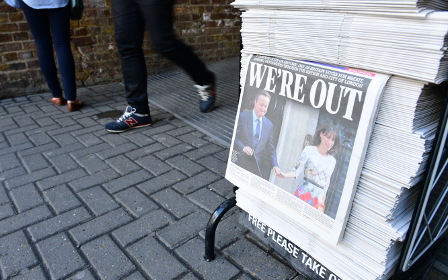 A cartoon in the Dutch paper AD Haagsche Courat styled after Edvard Munch's “The Scream” showed the German, Dutch and British leaders howling in horror, holding their hands to their faces.

“It's not an exaggeration to call it a disaster,” Spain's El Pais daily said in an editorial about Britons voting to leave the European Union in Thursday's referendum.

It urged EU nations to offer their citizens “ideas, plans, real leadership,” adding only then could the EU “be saved from the dangerous abyss it has reached”.

“A black day for Europe – OUTch!” was the banner headline of the German daily Bild, while Spain's El Mundo ran a cartoon showing the Beatles crossing Abbey Road towards an abyss.

“The Brexit shock will have profound geopolitical implications,” said an editorial in Italy's leading Corriere della Sera. “The European project will not be the same and the role of Europe in the world will inevitably be reshaped.”

Calling the UK referendum result a “blow to Europe”, Corriere said it marked the end of a period of optimism and cooperation in European history that began with the fall of the Berlin Wall.

“Europe is a common home that is on fire,” said Laurent Joffrin of France's left-leaning daily Liberation. “Its leaders have a rendezvous with history.”

He said Britons had voted with their pocketbooks and their disaffection was shared across the EU.

“The demographics of the vote leaves no doubt: the poorer and older you are in Great Britain, the more you reject the European project,” he said.

“Workers across the continent don't believe in it anymore. They are turning towards their national identities as the only credible rampart against the excesses of globalisation.”

Die Welt chastised German Chancellor Angela Merkel for her role in fanning anti-immigration sentiment, saying she “contributed to it significantly with the times she went it alone with her refugee policy.”

A “chain reaction” could follow that would doom Italy's Matteo Renzi in an October referendum as well as the French and German leaders, who face elections next year, the paper said.

But Austrian daily Die Presse warned against lambasting political elites in the aftermath of Brexit, which journalist Rainer Nowak said was seen as a “new victory of the underdogs over the decadent establishment”.

“Things cannot work without elites at a decision-making level,” he said. “(Rejecting) experts, universities, high culture, thinkers and debate… would be bad for everyone… not just Europe.”

Many editorialists saw the break with Britain as a watershed, with Jerome Fonglio of France's leading daily Le Monde saying it should prompt “deep thought about what (the EU) should be and the direction it should take”.

Italy's left-leaning La Repubblicca called on the youth of Europe to revitalise the European project.

“Europe belongs to you,” said a front-page headline. “Don't let the peddlers of fear win.”

“The crisis sparked by the British divorce requires sang-froid and intelligence,” he said, while warning that the bloc has become too unwieldy with 28 — and soon 27 — members.

In the end, wrote Herve Favre of France's La Voix du Nord: “Maybe one day we will thank our English friends for delivering the shock treatment that resuscitated the European patient.”