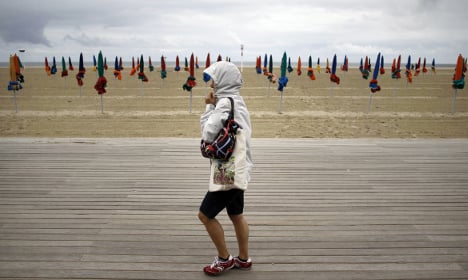 Is this what summer in France is going to be like? Photo: AFP
Summer officially arrived with the summer solstice falling on 20th June this year, marking the end of spring and the start of those much anticipated summer months.
Sunny blue skies, long warm evenings… Surely France deserves a bit of sun to cheer everyone up after months of endless rain and flooding.
However, this doesn't look to be the case. If the weather in the coming days offer us a glimpse of the summer season, the forecast for the next two months is mixed.

This week finally brought a taste of summer and sunny skies for almost all of France. The sun came out in Paris for what felt the first time since 1789.

The glorious weather is due to continue over the weekend, with temperatures in the south east set to reach up to 35C, according to newspaper Le Parisien.

Météo France's forecaster Gaetan Heymes advises that the public should make the most of the fine weather in the coming days because there’s no guarantee it will return.

Méteo France talks of a “huge cold anomaly on the North Atlantic Ocean” – so in short prepare for an unpredictable summer.

That’s bad news for sun seekers who still remember with fondness last year’s scorching summer, when the sun was always out.

“Unlike last year when there was heatwave conditions across France, this summer we know there will be a strong contrast between the north and the south,” Heymes told L’Express news site.

So while the south should be well baked in sun, the north will be wetter and cooler. Although the odd heatwave may travel up from the south coast, he said.

The normal average summer temperature for Paris is 24C, although last year the mercury rose 4C above the average.

“We already know that it won’t be the same this year,” said Hermes.

Luckily however he believes that even though summer storms are forecast France won’t see the kind of devastating flooding witnesses at the end of May and the beginning of June.

French weather site La chaine meteo describes the summer of 2016 as “atypical”, which cannot be good news. The site predicts: “recurring thunderstorms across the southern part of France”.

Olivier Proust on the other hand, also from Météo France, seemed more optimistic. He told French news channel BFMTV: “There is no established correlation between a cold rainy spring and a summer that will be the same”.

(According to la chaine meteo, this summer is 60% likely to be “very stormy, quite hot”. Photo: Lachainemeteo.fr)

But the only positive point as raised by weather journalist Laurent Cabrol is that “long term weather forecasts are 60-65 percent reliable”.

So you never know.