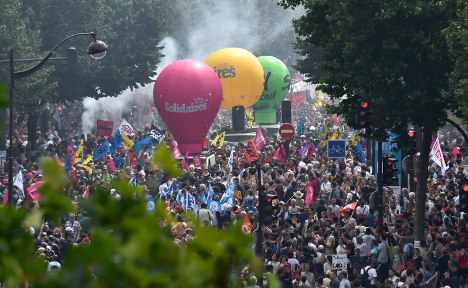 Protesters gathered at Place de la Bastille in the scorching summer sun for a march, the route of which has been cut short at the request of authorities fearing more violence.

More than 2,000 police were deployed, and around 100 people were barred from taking part in a bid to avoid the kind of violent scenes that marred a similar protest last week.

Unions claimed that some 60,000 marchers turned up in Paris for a march that for the most part passed off off peacefully. Police however estimated only around 20,000 protesters were present.

There were reports of groups of protesters gathering away from the main protest as several of them tried to block rails at the Gare de Lyon train station.
But by around 5pm there had been no repeat of the kind of violence witnessed during previous protests, however The Local's Oliver Gee who was at the protest said the atmosphere started to become tense in the late afternoon.

Heated scenes as a few scuffles break out between protesters and police at Paris demo. pic.twitter.com/MjpY7THRma

Earlier all protesters had been subject to searches as they arrived at Bastille for a protest called by trade unions opposed to labour reforms.

Even before the march began some 95 people had been arrested by police, for carrying objects that could have been used as projectiles. However there was outbreaks of trouble in the western city of Rennes, where windows of shops were smashed.

Thursday’s march in Paris had initially been banned by police before the Ministry of Interior agreed to allow the protest to go ahead albeit on a route of their choice – from Bastille along the basin d’Arsenal and back again.

Those who turned out called on the government to back down on labour reforms they claim will simply lead to more job insecurity because it will become easier to fire workers.
“They need to listen to the people in the streets. François Hollande made promises but he's doing politics of the right,” one marcher, who asked not to be named, told The Local.
And she said they are in it for the long haul.
“We won't stop until they understand. We'll be here all summer, until the rentrée. We are determined and mobilized.” Some who were there supported the so-called casseurs, the French name given to the hardcore rioters, who last week vandalised numerous shops and banks as well as a children's hospital.

“I support the casseurs, what they're doing is targeted action,” Antoine, a 23-year-old Parisian told The Local.
“They only damage things like banks and advertising companies. It's anti-capitalist.”

Members of the CGT Union – which called for the strike – stream through tight police controls. All roads blocked off pic.twitter.com/3VcDHnOXq0

While 200 police were also reportedly targeted and left injured during the most recent demonstrations, another student, 21-year-old William, said these were just the figures from a manipulative government.
“The government is trying to use these casseurs as propaganda. I don't throw and break things but at each protest we are in the front line to show support for them,” he said.
“Sure, there might be some who are just here to break things, but I've spoken to some and they were very intelligent people.”
While protesters and trade unions have vowed to carry on the movement, the French President François Hollande has also refused to back down despite the pressure from the street and members of his own party.

He vowed on Thursday that his Socialist government would “go all the way” to enact controversial labour reforms.

“On this draft law, we will go all the way because it is essential not only to allow businesses to be able to hire more” but to step up training that will lead to more jobs, he said as the latest of a string of anti-reform protests was to kick off in Paris.

However the fact that Hollande has already agreed to water down the reforms at the behest of more reformist trade unions has meant that many business leaders are just as unhappy with the bill as opponents are.