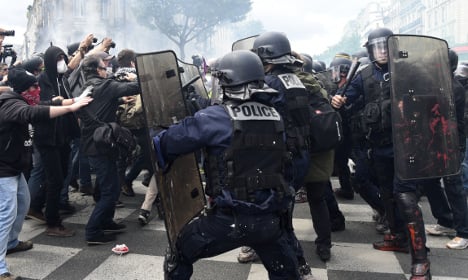 Protesters will take to the streets of Paris once again on Thursday after France's embattled Socialist government abandoned a bid to ban their march over security worries.

But in announcing the last-minute climbdown on Wednesday, the government warned that fresh violence would not be tolerated after the last protest on June 14 saw bloody clashes.

The violence came just four days after the start of the Euro 2016 football tournament in France, adding to the burden on security forces already facing the persistent threat of jihadist attacks.

Hooliganism at the Euro has further stretched police capacity.

Acrimonious negotiations finally yielded a compromise by which Thursday's march would follow a short, tightly contained route proposed by the interior ministry.

The marchers will head from Place de la Bastille to the Seine, looping around the Arsenal Basin before returning to the square where the royal prison was famously stormed in 1789 at the start of the French Revolution.

The march will be the 10th in a wave of protests against the government's disputed labour reforms that kicked off in March, with many descending into violence, notably in Paris and the western cities of Nantes and Rennes.

Protesters will be screened and searched “to prevent them from bringing in projectiles or items for disguising themselves,” said Paris police chief Michel Cadot.

More than 2,000 police will be deployed, and around 100 people will be barred from taking part, he told a news conference.

Police used water cannon to quell rioters who hurled projectiles at them and bashed in storefronts, with 40 people hurt and dozens arrested.