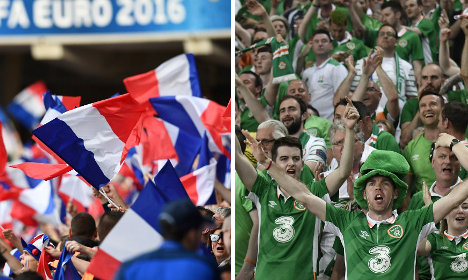 Lyon will be awash with green and blue on Sunday when hosts France take on Ireland in the last 16 of Euro 2016.

Les Bleus only found out their opposition after a late Robbie Brady header helped Ireland claim a memorable win over Italy in Lille on Wednesday night.

Up until then, it looked like France would be facing Northern Ireland on Sunday, but the late and deserved victory for Ireland sent the “Boys in Green” through as one of the four best placed third teams from the groups.

Brady was confident his team had a chance against France: “Over the last two years we have beaten some big teams, so we can't fear France. If we stick together we can beat anyone.”

France will be firm favourites to go through given their talented squad but they will be aware no doubt that the Irish will perhaps have added motivation in the form of revenge.

They still have bitter memories of Thierry Henry's hand ball in 2009 during the play-off for the World Cup in South Africa.

Henry's “Hand of Frog” as it was dubbed effectively knocked the Irish out and sent Les Bleus to South Africa instead, where they had a disastrous tournament.

The Irish FA launched a legal bid to sue football authorities Fifa over the handball, but instead were pacified after the governing body dropped €5 million into its bank accounts.

No doubt the raucous Irish fans who have won the hearts of the French public for the humour and bonhomie will head to Lyon en masse.

What can be assured is that if they don't take revenge, they will still have good craic.