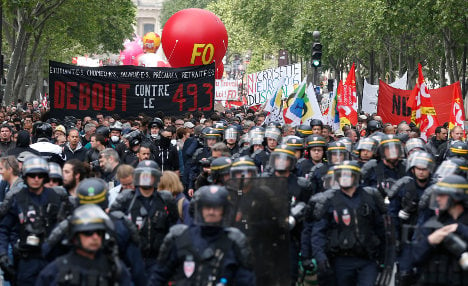 The French government and unions planning another demonstration against labour reforms had been at loggerheads over how to address security fears following the violence that marred a protest last week and several previous marches.

The unions had been demanding permission to march in Paris on Thursday, but the Socialist government — which has mooted the idea of banning protests while the Euro football tournament is under way in France — insisted that a stationary rally would be easier to control.

Initial reports suggested the police were set to cave in, as the government suggested alternative, more secure routes through Paris, that would help avoid the kind of destruction and violence witnessed last Tuesday. But on Wednesday morning Paris police chiefs sent out a statement saying the protest from Bastille to Place de la Nation would be banned because they could not guarantee the safety of police or property along the route.

“After careful examination, these alternative propositions do not respond in any way to the need to guarantee the security of people and property,” read a statement from the Paris police authority.

The prefecture also added that the demonstration would not be possible given the huge police mobilisation to counter the heightened terror threat, that has necessitated “an exceptional workload throughout the country.”

“With these conditions the Paris police authority considers  that is has no other choice but to ban the demonstration,” the statement read.

It is not clear whether they were still willing to allow a static demonstration to go ahead, but their stance is likely to draw an angry response from France's hardline trade unions.

Political reaction was swift with the far-right Marine Le Pen calling it a “serious attack on democracy” while dissident Socialist MP Christian Paul condemned the ban as an “historic error”.

The ban comes as French police have had to deal with outbreaks of hooliganism during the Euro 2016 tournament, as well the threat from terrorists which was made clear with the brutal murder of two police officials near Paris last week.

In an interview with The Local, a police union leader said officers “feared for their safety” and were “worn out”.

Earlier this week, Interior Minister Bernard Cazeneuve said in a letter to the head of the largest union, the CGT, on Monday that the June 14 unrest “for the first time clearly proved the role of some union activists in deliberate aggression against security forces.”

Given the “context of tension and recurrent clashes” another march “seems inconceivable,” he added.

Protests against France's hotly contested labour reforms kicked off in March and have frequently descended into violence, notably in Paris and in the western cities of Nantes and Rennes.

Last Tuesday, the violence reached a new peak when marchers bashed storefronts and attacked a children's hospital, smashing some of its windows.

Several hundred masked protesters hurled projectiles at police, who made dozens of arrests. Two police officers were hospitalised, while another 26 were injured.

After Tuesday's talks the unions said they “categorically refused” to limit the protest to a rally after proposing alternate routes to their planned march.

Seven unions had lodged a joint request late last week for permission for a march covering 2.3 kilometres from Bastille to Nation (1.4 miles), a short distance that they said “took into account” security concerns.

But on Monday, Paris police asked them to stage a rally without a march to reduce the risk of clashes.

Faced with the unions' refusal the police said they may be “forced to ban” the protest.

The seven unions responded jointly that the police should “guarantee everyone's safety” and that a rally would be “much more dangerous” than a march.

The day after the June 14 violence, President Francois Hollande threatened to ban demonstrations “if property and people and public property cannot be safeguarded,” his spokesman Stephane Le Foll said.

Le Foll noted that the security forces were already overstretched with the Euro and the continuing threat of jihadist attacks.

Earlier, a defiant Prime Minister Manuel Valls vowed to stand firm on the labour reforms despite the mass protests.

Hollande's Socialist government is trying to push through changes to the labour market in a bid to bring down France's stubbornly high unemployment rate.

But critics see the reforms as skewed towards business interests.