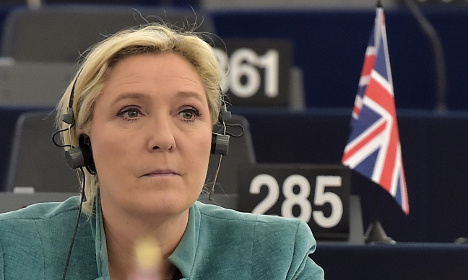 French far-right leader Marine Le Pen called on Tuesday on all European Union members, including France, to follow Britain's
example in holding a referendum on remaining in the bloc.

“What I'm asking for is a referendum in France. Every EU member should be able to have its say in a referendum,” National Front leader Le Pen, a fierce critic of the EU, told France's TF1 television.

Le Pen, who said she would back a Brexit if she were British, presented herself as a “defender of the freedom of people to choose their destiny and choose their laws.”

“It's been 11 years since the French were asked (about the EU),” she said, adding they had been “betrayed” by France's two main parties the last time such a vote was held.

She was referring to the referendum held in 2005, in which French voters rejected a draft EU constitution that was backed by President Francois Hollande's Socialists and  ex-president Nicolas Sarkozy's centre-right UMP, now known as The Republicans.

Three years later, the French parliament adopted a stripped-down version of the treaty, without resubmitting it to a popular vote.

The leader of the National Front, which topped the poll in France's voting for the European Parliament in 2014, accused the EU of pursuing closer integration “against our will”.

Also accusing the union of being responsible for high eurozone unemployment and of failing to keep out  “smugglers, terrorists (and) economic migrants,” Le Pen called on national leaders to come together to “build a Europe of nations to replace the totalitarian EU that we have today.”