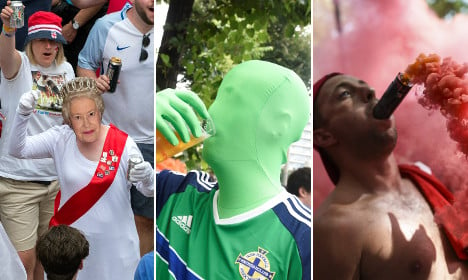 It's all too confusing for the French. Photo: AFP

I can’t be the only Brit in France to have been inundated by questions from befuddled French friends and colleagues in the last couple of weeks.

Euro 2016 has left them in a bit of a spin when it comes to Grande-Bretagne and its natives, and understandably so.

One French woman practically accused us of cheating in Euro 2016 because we had so many football teams in the competition.

“It’s not fair you have four chances of winning, we only have one,” she said presumably lumping Ireland in with the British teams of England, Wales and Northern Ireland.

I immediately calmed her by explaining that we had four chances of being desperately disappointed and that even with four teams, our odds of one team winning it remained zero. (However if Italy, France, Germany and Spain split up into regional teams, then we’d have a chance.)

I also explained that the important detail was that there isn’t really a “we” when it comes to football in Britain, given everyone’s tribal loyalties.

Granted most fans would be happy to see another British team do well (excluding Scotland and England perhaps) but they really only support one team.

Telling her that football was invented in Britain so we basically get to tell footballing chiefs at Fifa that we still want separate teams, even if they are not separate UN recognized countries, just confused her more.

But she wasn’t the only one who doesn’t get the difference between Britain and England. The French written press and TV commentators appear to have no idea either.

They regularly refer to the English as “Les Brittaniques” rather than “Les Anglais” although they do use that term too.

We shouldn't be surprised given that in the last Olympics the same commentators and sports writers would mostly refer to the British competitors as “Les Anglais”. The likes of Andy Murray probably wouldn’t take too kindly to that.

Nevertheless, can we really blame them, given how confusing it all is with Britain competing as one country in the Olympics and as four in international football tournaments.

But it wasn’t just the status of the British sporting teams that had the French asking questions.

The explanations for those questions should be left for someone with more knowledge than me to answer, but let’s just say the TV images of England fans guzzling back pint after pint from early morning and videos of a minority of fans chanting offensive songs about the war and throwing tables and chairs from all those lovely terraces at French police, have left the locals pondering perhaps if they’d be better off it Brexit happened.

Again, can you really blame them?

Some French have posed the question of whether the results in Euro 2016 could influence the ballot on Thursday.

With all three British teams making it into the knock-out stages, surely voters will see that staying in Europe is not a bad an idea after all.