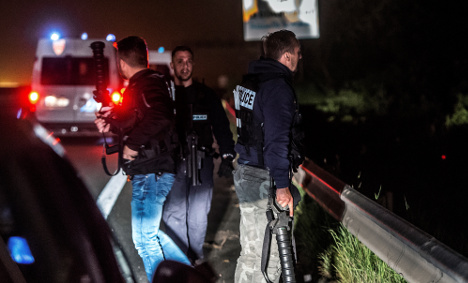 Police in Calais clear the road leading to the port. Photo: AFP

Hundreds of migrants clashed with police Monday on the road near the infamous “Jungle” camp in Calais, blocking
traffic to the northern French port.

Police fired tear gas to disperse the migrants, who tried to slow down traffic so they could jump onto lorries heading across the Channel to Britain, an AFP correspondent at the scene reported.

Several people managed to board trucks and tried to cut through the tarpaulin of the trailers to hide inside.

No one was injured in the clashes which involved 200-300 migrants, according to police, adding that at least one migrant had been arrested for “throwing a projectile”.

The road leading to the port was closed for several hours over the disturbances.

Between 4,000 and 5,000 migrants from the Middle East, Asia and Africa are living in squalid conditions in the Jungle in the hope of smuggling aboard lorries to Britain, where they hope to join family or find work.

These latest clashes with police come as Britain prepares to vote in a referendum on EU membership on Thursday.

Immigration is a hot-button issue, with the “Leave” camp saying controlling the influx of migrants into the country is a key reason for exiting the EU.