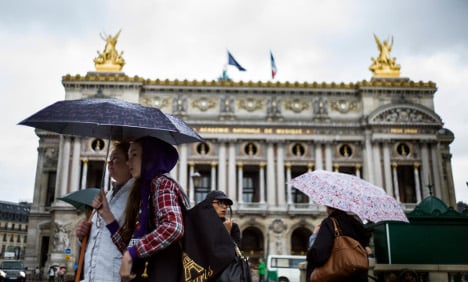 Parisians, never ones to suffer in silence, have had good cause to grumble of late: meteorologists confirmed Monday it has
been the wettest spring in the French capital in nearly 150 years.

The news came on the final day of spring, which, after weeks and weeks of grey skies and pouring rain, fittingly ended with an hours-long downpour in Paris.

And the rain continued to fall on Tuesday the official first day of Summer. Usually, after a long winter, Parisians flood parks and the outdoors to soak up some much-needed spring sun, quaffing wine on the banks of the Seine or sipping cocktails on restaurant terraces.

But this year, with the summer solstice on Tuesday, it is still boots and coats for most Parisians, who have only seen the sun peek through the clouds a handful of times.

The French meteorological agency Meteo-France said the three months of rain (320 mm) were double the normal amount, and the most since records began in 1873.

In early June, residents watched in awe as the Seine river rose to its highest level in three decades, prompting the closure of the riverside Louvre and Orsay museums while they evacuated priceless artworks. The flooding which saw rescuers rowing canoes through towns around Paris, caused around one billion euros in damages, the AFA insurance association said on Friday.

While summer will arrive for a day or two this week, storms and lower temperatures will follow.

“There is no generalised, sunny weather expected for the moment,” said Kapikian.