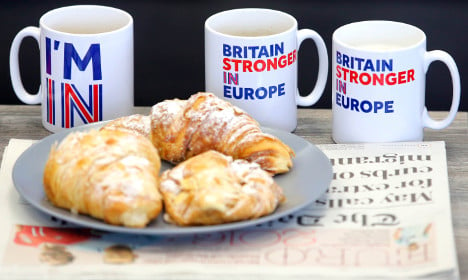 From bloody wars to gentle ribbing and occasional cross-Channel bashing, France and Britain's relationship status has been complicated for nearly a thousand years.

And as Britain wavers over whether or not to leave the European Union, studies show its old Gallic “frenemy” has a larger proportion of citizens in favour of the Brexit than other members polled.

A series of polls between April and June show that between 32 percent and 41 percent of the French population would see their neighbour's departure from the EU in a positive light.

The most recent study by the Pew Research Center showed that the overwhelming feeling across Europe was that Brexit would be bad for the EU, a sentiment felt most strongly in Sweden, the Netherlands and Germany.

“France is the only country where more than a quarter of the public says it would be positive for the EU if the UK departed,” the report said.

From the Norman invasion of England in 1066 to political spats over the war in Iraq in 2003, the panoply of Anglo-Franco conflicts have led to the folkloric belief that the two sides cannot abide each other.

A favourite anecdote in France comes from when then prime minister Jacques Chirac forgot his microphone was on during a 1988 European summit, while fuming over Margaret Thatcher's demands for a budgetary rebate for Britain.

“What more does this housewife want from me? My balls on a platter?” fumed Chirac.

However in reality, with so many French people living in London it is nicknamed “Little Paris”, ties between the two nations are perfectly cordial these days — a little teasing here and there aside.

The biggest bone of contention in recent years has been over the management of a migrant camp in the northern French city of Calais, from where many make desperate efforts to reach Britain.

Analysts say the polls are perhaps more revealing about France's attitude to the EU in general than to Britain.

The Pew study revealed growing doubts about the EU in France where favourable sentiment to the bloc fell 17 points between 2015 and 2016, mostly among the older population.

Only Greece — hit by the doubly whammy of the economic crisis and the migrant crisis — was more critical of the EU than France.

The study showed much of the increasing gloom about the EU across the bloc was a result of the handling of the refugee crisis.

Those in France who do favour a Brexit come from widely differing political backgrounds, from the anti-Europe far-right to those who want a more integrated Europe and see Britain as an obstacle to this.

“There is the impression in France that the British have always been an impediment to deepening the European Union. Intuitively, some tell themselves 'if they leave, we can do more',” said Francois Lafond, a professor at the Sciences-Po university.

On the other hand, for the far-right, a “Leave” vote would be a welcome sign of “the beginning of the end”.

“It means that they can finally demand the same thing,” he said.

Far-Right National Front (FN) leader Marine Le Pen said as much at a rally in Vienna on Friday.

“France has maybe a thousand more reasons to want to leave the EU than the English,” she said.

Perhaps the most telling thing about the Pew study, echoing the other polls, is how divided French society is on the European Union.

When asked about future of the EU, 39 percent of people said some powers should be returned to national governments.

However 34 percent of French people wanted more power transferred to the EU, the largest percentage of any of the countries polled.