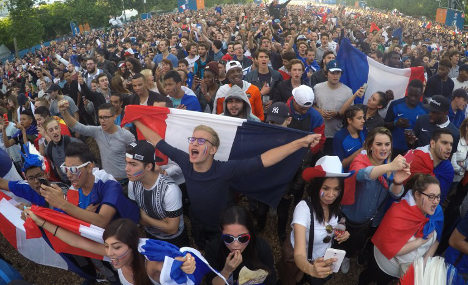 It was a simple case of 'job done' for France on Sunday night as Les Bleus secured top spot in Group A to line up a last 16-tie in Lyon next Sunday night.

But their Euro 2016 will now get a little more arduous.

Paul Pogba shone through the mediocrity in a subdued 0-0 draw with Switzerland in Lille on Sunday.

A game that featured a substandard pitch, ripped Switzerland shirts and a burst ball concluded in a mutually convenient result that allowed the Swiss to join Didier Deschamps's France in the last 16.

But Pogba, dogged by controversy over an alleged contentious gesture prior to the game, did his best to illuminate proceedings, twice hitting the bar, as did French substitute Dimitri Payet late in the game.

“We were there to secure first place and we did it, so it's mission accomplished,” France coach Deschamps told M6 television.

“Had we been a bit more clinical or had more luck, we could have won.”

As group winners, France will face the third-place team in either Group C, D or E in Lyon on June 26, while Switzerland will come up against either Germany, Poland or Northern Ireland a day earlier.

It was mission accomplished, therefore, for France, but following narrow wins over Romania and Albania, their failure to record a seventh consecutive victory means they advance with little momentum.

“I'm not blind, I do realize that we can do better,” added Deschamps (photo below). “Now a new competition is going to start for us next Sunday. We have a long week ahead of us and that will give us time to prepare.”

A dry, patchy pitch at Stade Pierre-Mauroy made it difficult for both teams to get the ball down and play football, but aside from a few slips, Pogba did not seemed perturbed by the conditions underfoot.

One of five players brought into the France team by Deschamps, in changes that saw in-form playmaker Payet left on the bench, the Juventus star seemed determined to erase the memory of his alleged 'bras d'honneur' following Payet's second goal in Wednesday's 2-0 win over Albania.

Deployed in his preferred position on the left of a midfield three, he threatened three times in five minutes, forcing Swiss goalkeeper Yann Sommer to produce a sharp save in between two efforts that clipped the bar from outside the box.

He also provided the first half's only real moment of danger in the French penalty area when he unintentionally scuffed Xherdan Shaqiri's eighth-minute corner towards his own goal.

Pogba aside, Switzerland's biggest concern in the first period was the flimsiness of their shirts as Admir Mehmedi, Granit Xhaka and Breel Embolo all had big holes torn in theirs.

Switzerland began to find joy behind French full-backs Bacary Sagna and Patrice Evra in the second half, but the chances continued to fall to France.

Andre-Pierre Gignac shot straight at Sommer, while Pogba excelled again by holding off four opponents and finding Antoine Griezmann, who played a one-two with Gignac before seeing a right-foot shot tipped over by Sommer.

Payet made his entrance in the 63rd minute, replacing Kingsley Coman, and received a huge ovation from France's fans, who were eager to see greater guile in their team's attacks.

Payet immediately supplied an injection of dynamism, leaving the crossbar shuddering with a side-foot volley from Moussa Sissoko's deep cross and then flashing a half-volley wide.

Switzerland have now gone seven games without beating France, since a 2-1 win masterminded by current England coach Roy Hodgson in May 1992, but they will now contest a Euro knockout phase for the first time.

Switzerland coach Vladimir Petkovic said: “We'll wait and see who we play against and then we'll be ready.

“We can hold our own with strong opponents and we still have time to improve.”