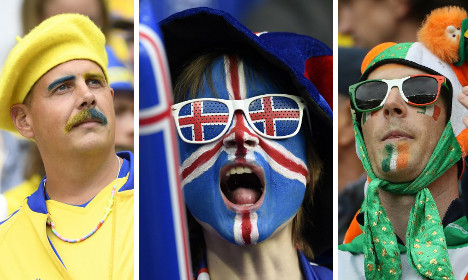 Yes there have been some nasty violent clashes and some embarrassing and provocative chanting, but there are also a lot of good, fun loving fans at Euro 2016. Yes including English and Russians.

These are the fans who are way behind the scenes and who often go unnoticed.

But in today's ultra-connected online world where everyone can video everything, these small acts of kindness or awesomeness are being magnified as they're uploaded to social media.

From fans helping an old French couple to change a tyre, to some hilarious chants, and to the country that sent 8 percent of its population to France – we've gathered the fans we think are the top five in France this year.

But we'll get the bottom two out of the way first: Sorry England and Russia fans, we know there so many good among you, but the bad ones pull you down. We've all seen enough of the embarrassing videos of fighting or chanting so we won't show you any more.

On to the good guys.

Fair play to France fans for ignoring all the terror fears and getting into the tournament by packing out the fan zones, which had been the subject of security fears. France fans, bar a few naughty local youths, have been excellent hosts so far and have had to put up with a fair bit.

The French take their football seriously but do it with a sense of humour (sometimes including baguettes), and the two wins to start the tournament have left the French cheering mightily.  Check out how they celebrated the second goal against Albania in Paris on Wednesday.

And you can't beat the French for their renditions of the Marseillaise.

Ah, the lovable Swedes. Paris has been awash with a sea of bright yellow this past week as the Swedes have descended en masse, as they tend to do.

And while they haven't managed to score a goal yet (the only time they found the net was through an own goal), the Swedes have been in fine form. And always ever so polite. One particular highlight that's gone viral has been the video below of the Swedes getting rival fans to sing along to Abba songs.

The Northern Ireland fans have been turning heads at the Euros, and their chant about their player Will Grigg has been a big part of it. The chant sees the lyrics from a hit 90s song changed from: “freed from desire, mind and senses purified” to: “Will Grigg's on fire, your defence is terrified.”
The song even reached the top ten of the UK charts, apparently.
Here's a clip of the fans trying to “teach” it to the Poland supporters before a match.

Can't believe Northern Ireland stuck with God Save The Queen as the national anthem, when they could have had Will Griggs on Fire

And below, here is a clip about what it's all about – a few minutes of chanting between Northern Ireland and Poland that – instead of turning into a fight – ends with supporters from both camps high fiving and hugging one another. Props to Poland supporters too!

On paper, the Iceland fans are the most supportive. Let's look at the stats:

The country has a population of 332,000 people – making it the least-populated country to ever qualify for the competition.

And a whopping 27,000 Icelandic fans headed down to Saint-Etienne to watch them tie with Portugal. That's around 8 percent of the nation's population!!

Iceland: more regular match-going fans as a % of population than any team at Euro 2016. pic.twitter.com/Fta5Kh9UC9

Extra points for their commentator who just about had a hernia when Iceland scored, the sense of humour of their fans, and their “terrifying” and perfectly synchronised chants.

That Iceland viking chant is still terrifying when there's only 50 of them. https://t.co/c3CHpMU5Yz The green army seem to leave everyone they meet with a smile on their face – even their opponents. Here are some of their best moments that have been captured online.

Serenading a nun with Our Father song.

“Clean up, for the boys in green” – cleaning up after themselves.

The Irish cleaning up after themselves in France. Class #EURO2016 #FRA pic.twitter.com/9D2IWEclJI

Go home to your sexy wives

There are just too many videos out there to choose from. Well done Irish fans, showing everyone else how it can be done.

Now they just need to work on their dancing and they'd be the perfect fans: