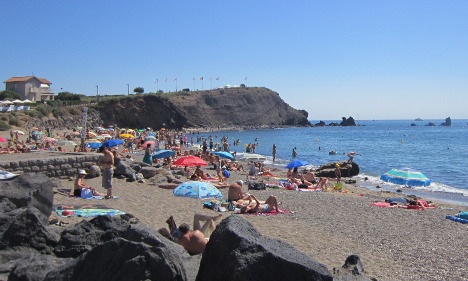 Photo: Pepe Martin/Flickr
The man had said that he wanted to attack the famous Cap d'Agde nudist colony on the coast of southern France, the Midi Libre newspaper reported.
Other inmates reported the man to authorities after he confessed his desire was motivated by the fact he did not like the “naked arses” of the nudists at Cap d'Agde.
The inmates also accused the convicted man of proselytism (attempting to convert others to his religion), anti-Semitism, and for being extremely noisy with his calls to prayer.
On the very day he was set to be released a court in Beziers, southern France, ruled this week to extend the man's sentence by six months, just days before he was supposed to be released.
The man had been sentenced in October to a year in prison for glorifying terrorism after his gun-themed kebab restaurant in southern France's Beziers triggered police concern.
His entire restaurant – Toubib Burger – appeared to be an homage to weaponry, with the T in the shop's name resembling a Kalashnikov. The menu was no better, with one option named K-Lach – an apparent reference to the the Russian firearm Kalashnikov – and another called M16.
The convicted man, who is in his mid forties, converted from Catholicism to Islam and is a known acquaintance of Mohamed Merah, whose shooting spree in and around the southern city of Toulouse left seven people dead, reported  Europe 1.
The man had been sentenced to prison previously after he was found to be in possession of six kilogrammes of cannabis, two assault rifles, and a handgun.
Before his arrest, the man had been known to “like” Islamist propaganda videos on Facebook.
France was shaken last week by reports of another planned terror attack in the area, after a man was arrested for allegedly plotting to hit Carcassone, a popular tourist haunt some 100 kilometres from Cap d'Agde.