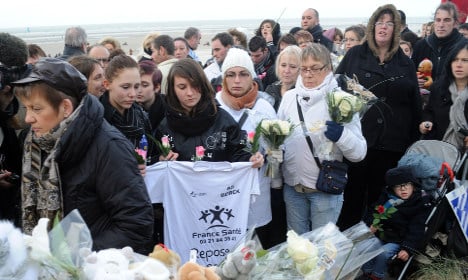 Locals in Berck-sur-Mer march in memory of the child. Photo: AFP

Fabienne Kabou, 39, described as highly intelligent but believed to be suffering hallucinations and depression, travelled with her daughter from their home in Paris to the northern resort town of Berck-sur-Mer in November 2013.

She enquired about the local tidal forecast before leaving 15-month-old Adelaide near the water on the vast sandy beach on a wintry night.

The baby's lifeless body was discovered early the next morning by prawn fishermen.

“I put an end to her life because it was easier that way,” Kabou told investigators. “Everything went perfectly. It was as if I felt carried along, I just couldn't say stop.”

Her lawyer Fabienne Roy-Nansion said shortly before the start of the trial that Kabou “sees her act as we all see it, that is to say, something utterly horrible, and she considers herself indefensible.”

Kabou, of Senegalese origin, is charged with premeditated murder and faces life in prison.

From the start she has made little effort to hide or deny her crime, and video surveillance allowed police to track her down 10 days afterwards to her home — a renovated art studio where she lived with Adelaide's father, some 30 years her senior.

Roy-Nansion describes Kabou as from a well-to-do Catholic background and of “remarkable intelligence”.

After moving from Dakar to Paris she studied architecture and philosophy.

Kabou has given varying reasons for her act, from the difficulty the child caused in her relationship, to witchcraft and hallucinations.

“Her psychological status is largely influenced by cultural references and an individual history linked to Senegalese witchcraft that radically altered her view of the world,” one psychological expert found.

However another court psychiatrist, Paul Bensussan, said her act was possibly triggered by a deep depression related to the birth of her child.

“Infanticide committed by the mother is often underpinned by a psychiatric pathology,” he said. “In most cases the mother is deeply depressed” and sees her act as a kind of “altruistic suicide”, saving her child from suffering.

Her lawyer has said the child was born in the couple's home and was never registered. No one close to the couple, not even Kabou's mother, knew of her existence.

The pregnancy “was a happy surprise for her, not necessarily for the father. I think she felt deeply alone,” said Roy-Nansion.

The father, Michel Lafon, a sculptor, did not take an interest in, or recognise the child, according to court documents. A DNA test was carried out after Kabou's arrest to prove his paternity.

Kabou has told investigators she chose the town because it sounded like a “sad” place. “Even the name is sad.” While Berck means dune in Flemish, it also means “yuck” in French.