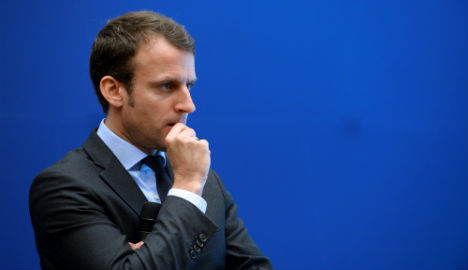 French Economy Minister Emmanuel Macron will not treat Britain kindly in the event of a Leave vote. Photo: Eric Piermont/AFP
Britain's EU referendum will be held on Thursday, with an EU summit set for a few days later on June 28 at which Macron said EU leaders should take a firm stand with regard to the UK.
“You are in or out… The European Council should give the British an ultimatum about their intentions, and France's president will be very clear about that,” Macron said in an interview with Le Monde published Saturday.
“We cannot, in the interests of the EU, leave any ambiguity to linger and to let too much time pass,” Macron said.
If Britain leaves the bloc, “the day after the exit, there will no longer be a financial passport for British establishments,” he added.
Macron said in his view if the British want to maintain access to the European market, they should contribute to the EU budget, just like non-members Norway and Switzerland.
If London refuses, “then that would be a total exit,” said the economy minister, a strong EU advocate.
Campaigning in Britain on the EU referendum was suspended Saturday for a third day following the killing of a pro-Europe lawmaker and amid calls for a less acrimonious political debate.
The WhatUKThinks average of the last six opinion polls currently shows 52 percent of voters in favour of “Leave” and 48 percent for “Remain”, excluding undecided voters.