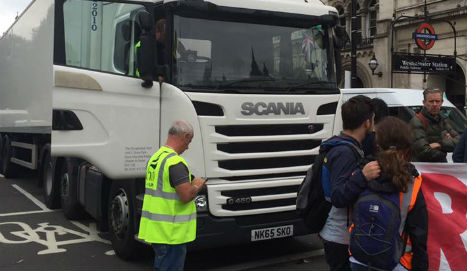 A lorry from the Convoy to Calais protest arrives in Westminster. Photo: Convoy to Calais
After gathering near Parliament, the convoy set off for Dover at around 0900 GMT and organisers said they were hoping to reach northern France by ferry at around 1400 GMT.
“We're on our way. Over 250 vehicles, including a 38-tonne lorry full of aid, are on the convoy,” Sam Fairbairn, national secretary of the People's Assembly, one of the organisers, told AFP.
Local authorities in the Calais region have taken out a public order injunction against the convoy, which had initially planned to go to the so-called Jungle camp in Calais.
The Stop the War group, which is also taking part in the initiative, said the distribution point had been changed but did not provide details on where it would be.
“Our support for the refugees remains unwavering as their predicament becomes ever more fragile and uncertain,” the coalition behind the Convoy to Calais initiative said in a statement on Friday.
“We have therefore decided to go ahead with the convoy and have found an alternative venue in France.”
They said they were “extremely disappointed” by the ban.
French police justified the ban citing security concerns, pointing to the major deployment in place for the Euro 2016 football championship and the demands of counter-terrorism.
Around 4,000 migrants, mainly from Afghanistan and Sudan, live in the Jungle camp in Calais, according to an official estimate from April.
Convoy organisers claim the number is closer to 5,000