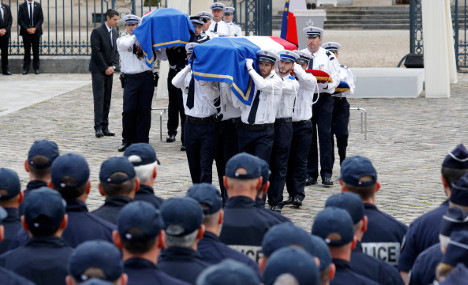 On Friday a French policeman stood in line to greet President François Hollande and Prime Minister Manuel Valls, who were visiting the town of Mantes la Jolie to pay their respects to the two police officials brutally murdered by a jihadist on Monday.

But as Hollande and Valls held out their hands, the police officer boldly refused to oblige.

He later told a French TV station that he simply couldn’t shake hands with the head of state because he was too angry about the lack of resources given to officers.

Police union leaders told The Local however that the defiant act was not a sign of a growing rift between the state and police, just a demonstration of the pressure they are under and the raw emotion after recently losing two colleagues to a bloodthirsty 25-year-old jihadist.

“People need to understand we are experiencing a moment of extreme emotion,” Stanislas Gaudon from the police union Alliance told The Local.

“We can understand the reaction of this policeman, even if the president and the Prime Minister had come to pay homage and show support.

“This officer experiences the problems we face on a daily basis and there are issues at every police station in France,” he said.

Since the murder of three police officers during the January terror attacks of 2015 the forces of law and order have been on the front line in the battle against terror.

The grave danger they faced was viciously made clear during the stabbing to death of Jean-Baptiste Salvaing and his partner Jessica Schneider.

“We are worried about our safety,” said Gaudon. “We know we will be attacked again but we don’t know where or when.”

Police officers expect to face danger while they are on their shift but they also expect to be able to retreat from the firing line during their time off. Not anymore it seems.

“These things can happen sometimes when we are on the job but this was a savage attack at home, it’s on another level,” said Gaudon.

Dealing with the complex terror threat alone would be a challenge enough for the French police force, but that’s not all they have on their plate right now, far from it.

Hundreds of officers have been policing the borders since the November attacks and every major event like the Cannes Film Festival or the COP 21 climate conference have required massive amounts of policing.

And now there’s Euro 2016, which has placed them in the firing line of a minority of bottle hurling, drunken England fans, Russian hooligans and some local ultras intent on provoking a fight.

Then there’s the hardcore French rioters, who during recent anti-labour law protests over the last three months, have left some 600 officers injured, including 200 in last Tuesdays demo that was considered the most violent of them all. Yet there appears more trouble ahead. More protests are planned and the Tour de France and the national Bastille Day celebration on July 14th are just around the corner.

“The police are still motivated,” said Gaudon. “We are still doing what we are asked, but we are tied. We have 1,500 officers on duty for a football match at Euro 2016 and we still have to do our daily job of policing and making sure areas like airports and train stations are secure.

“There’s no respite. And this is putting the security of the French people in peril.”

Perhaps the French police would feel a little better if they sensed they had the support of the public, but in a sign of how bad things have become, police were forced to hold their own street demo against “anti-cop hatred” last month.

A police car was burned while they gathered to call for support. Gaudon says the government is listening to their concerns. They have persuaded the ministry of interior to let them carry their arms whilst off duty, permanently and they are also hoping to change the law to guarantee the anonymity of police in legal proceedings.

“It is up to the government to protect us,” he added.

He also said the CGT union need to demonstrate support for the police instead of publishing posters alluding to police brutality.

“They need to take charge of their own protesters,” he said. And a message to those England fans who have reacted aggressively to some of the police’s tactics.

“I don’t want to talk about blame, but it’s clear that the massive amount of alcohol they consume is going to lead to problems,” he said.

“Euro 2016 is supposed to be a festive occasion. They need to take responsibility.”