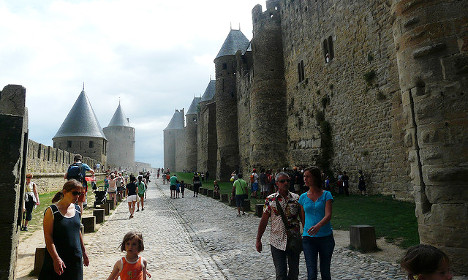 The city of Carcassone. Photo: Pablo Sanxiao/Flickr
The 22-year-old man was arrested on Monday night in Carcassonne, a famous historic town in the south of France, while carrying “a knife and a small mallet”, a judicial source told AFP.
Investigators reportedly found a gun and a machete at his home.
His intention was to carry out “a violent act, in particular targeting Americans and Russians”, the source added.
Reports have also said that he was targeting British tourists too, and that he planned to turn on police afterwards.
Carcassone, a medieval walled city and a Unesco World Heritage site, is a popular tourist destination for foreigners and the French.
So who is the man arrested?
The suspect comes from the southern French town of Lunel – notorious for the high percentage of residents who have left to wage jihad in Syria – but had been living in the nearby Tarn region.
Since his arrest on Monday night, he has been cooperative with his lawyer, who says that the suspect has psychiatric disorders including schizophrenia, Le Monde newspaper reported.
His lawyer said that the suspect had been living in “social and intellectual poverty”, and was a “fragile young man”.

The man never knew his father, and kept no contact with anyone in his family besides his mother.
The suspect didn't have a job, and lived mostly in homeless shelters, investigators told the paper.
In 2014, the man converted to Islam and had connections to the Islamic state after becoming radicalized online. He was considered to be “fully radicalized” and a “serious profile” for investigators.
They said that the 22-year-old had wanted to go to Syria but couldn't afford it, and instead planned to die a martyr in France.
Police picked the man up at Carcassonne train station, where he had visited recently on “scouting” trips, where he particularly looked into the possibility of tourist buses as a target. The suspect said that he had been given a call to act during the holy month of Ramadan, reported Le Parisien newspaper, although it remains unclear exactly where this call came from.
He had a so-called “fiche S” (“S file”), which are given to those individuals who are considered a specific threat to security and includes those who have been radicalized.
He had previously been under house arrest over a three-month period in Paris, the paper reported.

The man has reportedly been under surveillance since the state of emergency.
Psychologically troubled jihadists are a particular concern to French authorities, an investigator specializing in anti-terrorism told Le Parisien newspaper.
“This is a flagship case of the kind of threat that we are faced with,” the investigator said.
“As well as the Isis commandos that we have to identify and deal with, we have to be extremely vigilant about the psychological cases who can potentially tip at any moment.”
The paper added that around 20 percent of jihadists known to intelligence services have some kind of psychiatric history. The man planned to hit the southwestern city of Carcassone: Photo: AFP