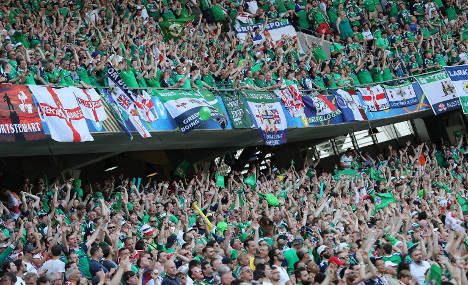 A Northern Ireland supporter suffered a suspected heart attack and died while watching his country beat Ukraine at
Euro 2016 on Thursday, police said.

The man, in his sixties, collapsed in the upper section of the Stade de Lyon and paramedics were unable to revive him.

Fellow supporters left flags, shirts and scarves at the stadium in tribute to the dead man.

“The fan passed away as he was watching the game in the stadium. This puts any result of a football match into perspective,” said Patrick Nelson, chief executive of the Irish FA.

“The thoughts of the board, management, players and staff are with his family and friends at this sad time.”

He is the second Northern Ireland fan to die during the championships. Darren Rodgers, 24, fell to his death from a beachside promenade in the southern city of Nice on Monday.

Supporters paid tribute to him by applauding during the 24th minute of Thursday night's match against Ukraine, which Northern Ireland won 2-0.

Superintendent Nigel Goddard of the Police Service of Northern Ireland (PSNI) said of the latest case: “Our thoughts are tragically with a second family this week mourning the devastating loss of their loved one.

“We understand the man aged in his sixties collapsed during the game and was attended to by emergency services in the Stade de Lyon.”