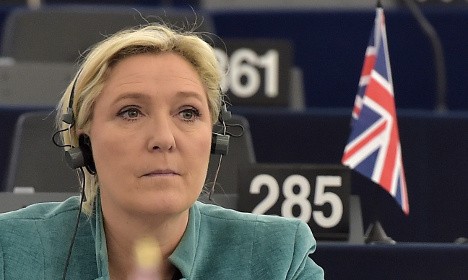 Photo: AFP
Speaking before a meeting in Vienna of other “patriotic” European parties, Le Pen also said it would be “indecent” for either side in the debate to capitalise on Thursday's murder of British MP Jo Cox.
“France possibly has a thousand more reasons to want to leave the EU than the English,” and all bloc members “need to question their relations with the EU,” Le Pen told a news conferrence.
The strength of the Brexit camp ahead of the June 23 on whether to leave the 28-nation bloc was a “strong sign” of a popular awakening, she said.
Le Pen, who expected to make a strong run for the French presidency in 2017, also warned British voters not to be swayed by predictions of “the most unimaginable catastrophes” if Britain leaves the EU.
If elected next year, Le Pen has declared she would become “Madame Frexit” and call a referendum on France's EU membership within six months.
Appearing with Heinz-Christian Strache of Austria's Freedom Party (FPOe), Le Pen said Europe needed to be more “a la carte” with members able to can pick-and-choose areas of closer integration.
“We want to spread this idea of Europe 'a la carte' that some countries have already attained, like Denmark… and Britain of course,” she added,  saying it was the only way “to ensure a prosperous and peaceful future” in a bloc riven by “confusion and chaos”.
Le Pen was in Vienna for a “Patriotic Spring” event with the Europe for Nations and Freedom alliance, the nine-country European parliamentary bloc that she chairs.
Among those expected to attend the event later on Friday were Lorenzo Fontana of Italy's Northern League, Marcus Pretzell from Alternative for Germany (AfD), Gerolf Annemans from Belgium's Vlaams Belang (Flemish Interest) and former UK Independence Party (UKIP) member Janice Atkinson.
Populist parties across Europe and beyond have gained traction in recent years, with their alarm over immigration and attacks on the political “elite” resonating strongly with voters.
In Austria, Norbert Hofer of the FPOe — who welcomed Le Pen to Vienna with a kiss on her hand — last month came close to being elected to the largely ceremonial but coveted post of president. The party has contested the result.