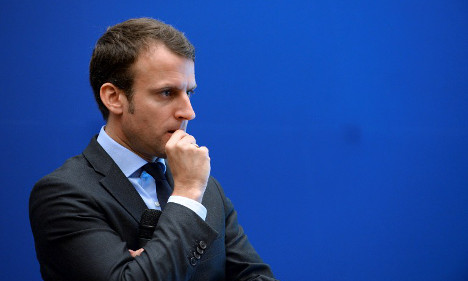 Photo: AFP
“I believe in Europe, but in its reorganisation,” Macron told RTL radio.
“It's the end of an ultra-liberal Europe that has lost its political direction,” Macron said. “The European project cannot only be a system of abolishing rules.”
He said the heart of the British debate was correcting the effect of ultra-liberal policies “that they pushed us into.”
“The issue is not whether we can be more competitive, if we should open up this or that market, it is whether we can succeed in living better, together,” the 38-year-old former Rothschild banker said.
And while Macron said people should have a voice on the future of Europe, he felt the June 23rd referendum was “dangerous” and that Britain had “taken the rest of the European Union hostage”.
The outspoken minister, who regularly polls higher than unpopular President Francois Hollande and is thought to harbour presidential ambitions, said that if Britain voted to leave, the EU would need to “act fast to avoid other countries starting a similar process.”
“There must be no question of Denmark, the Netherlands, Poland, deciding they want the same status,” he said.
Macron said that Britain could still have access to the EU single market, even if the country chose to exit the bloc, citing the cases of Norway and Switzerland.
“These countries contribute to the EU budget,” he noted.
Macron said that if Britain does pull out, it could have a “positive effect” on the French economy, and while it would create turbulence on the markets he did not believe it would last.
“I think we have the collective capacity to reassure.”