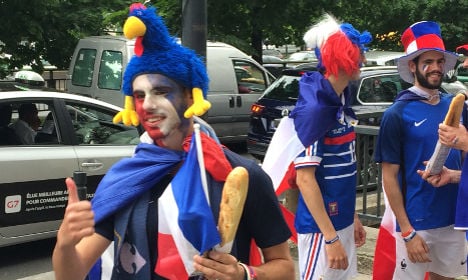 Despite the violence of football fans hitting the headlines, many supporters are having a great time backing their national teams in Euro 2016.

Flags, face paints and football shirts can be spotted in cities and stadiums across France.

90th birthday celebrations in Paris? An English fan wearing a mask of the Queen gestures in the fan zone at the Eiffel Tower, during England's draw against Russia. Photo: AFP

Two supports sport the tricolore and a rooster hat ahead of France's opening game against Romania. Photo: AFP

Other French fans opted for the more traditional baguette to cheer on Les Bleus, brilliant if they needed something to nibble on in those tense last few minutes before Payet's winner.

A Spanish foot-bull fan dressed as a matador takes a selfie before their 1-0 victory over the Czech Republic at the Stadium Municipal in Toulouse. Photo: AFP

Sweden fan in Paris up bright and early for tonight's match against Ireland. pic.twitter.com/BYCHT9Q0Pc

One fan was spotted having a snooze outside of a bar on the morning of his team Sweden's 1-1 draw with Ireland.
Russian fans watch their opening game in the fan zone at the Eiffel Tower in somewhat more peaceful scenes than in Marseille that night. Photo: AFP
German supporters take their muppets to the game against Ukraine at the Stade Pierre Mauroy in Lille. Photo: AFP
A Polish fan dressed as a football cheers on his team as they beat Northern Ireland by a goal in Nice. Photo: AFP
English fans ignore the recent BBC News' debate about whether crusader costumes are offensive, cheering on their team in knight-attire. Photo: AFP
Irish fans had their hearts set on charming Paris yesterday, with videos circulating on twitter of their jovial and non-violent celebrations. The best fans of Euro 2016 so far?

#Irl fans have the right idea.

Russian fans make clear their attitude of “no surrend” in the face of their suspended ban from the tournament.

A Swiss cow moos in support of his team as they face Romania at the Parc des Princes stadium in Paris. Photo: AFP
A dog sports the French team jersey in Vieux Port in Marseille. Photo: AFP
Slovakia fans a-head of the game with elaborate face paints before they beat Russia in Lille. Photo: AFP

Portuguese ninja turtles wait for their game to start in Saint-Etienne. Photo: AFP

An Iceland fan dressed as a Viking sings whilst his team hold Portugal to a 1-1 draw. Photo: AFP

French and Albanian fans join forces before France's last minute victory yesterday. By no means the first instance of fan camaraderie after Ireland and Sweden fans amicable display on Monday.