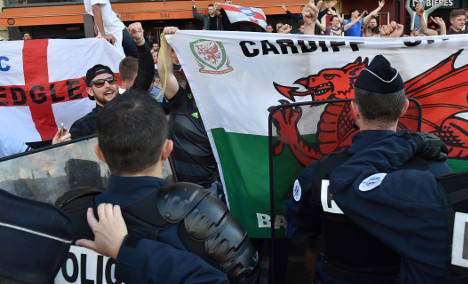 England and Wales fans will descend on tiny Lens on Thursday. Photo: AFP

Schools were closed, shops shuttered and many residents were ready to spend the day at home as Lens, a small mining town in northern France, steadied itself ahead of the crunch England versus Wales match.

The town, located in Pas-de-Calais, one of the poorest parts of France, has a population of just 36,000 and will welcome over 50,000 supporters on Thursday from England and Wales.

Images of the violence involving England fans in Marseille and Lille will understandably have left residents and business owners in Lens more than a little nervy that the Battle of Britain won't just be on the pitch.

“Many shops and institutions have decided to close out of precaution,” Marlene Virey from the Lens tourist board told The Local on Thursday.

“That’s their own choice to make, but we are open. We are not particularly worried about all the English arriving. It’s a chance for us to promote the town.

And some fans are not just there for the football and have been seeking out some French culture and history.

“Many of them have been visiting the Lens Louvre gallery and the local war museum,” Virey said.

While there were clashes between drunken England fans and French police in nearby Lille, Lens remained fairly trouble free on Wednesday if not quite peaceful.

On the move in #Lille tonight pic.twitter.com/YlVKQrZrjs

That may in part be down to the 2,400 police and security guards drafted in for the match. There are around 4,000 on duty in Lille.

The local authority chief has said the town will be in “lockdown” for the match, and extra stewards and police will be on duty inside the Bollaert-Delelis stadium.

There will also be 20 British police “spotters” backing up the French looking for known troublemakers.

This is the police control room in #Lens – cctv cameras in town linked back to big screens to monitor fans. pic.twitter.com/G6dM6e7cpK

“Generally it was a good atmosphere last night, lots of singing, because of course we know the English like to sing and also to drink,” the tourist office's Marlene Virey added.

“There is obviously a huge security presence here which does make it a little tense.”

A decision was taken some weeks ago by the mayor to close all schools for the day. It wasn’t so the kids can watch the game, but so they wouldn’t have to share the streets with the boisterous hordes.

ALSO: Three reasons to go to Lens (when there's no football on) 'After everything that happened, yes we are worried'

In a bid to stop the crowds getting too drunk, there is a booze ban in place in Lens. That means supermarkets selling alcohol will be closed until Friday morning.

Bars however will be allowed to stay open until midnight, unless police take action earlier. The official fan zone in Lens will also be selling alcohol.

Louisa Bonadonna, who works at Il Palermo restaurant and bar, said: “After everything that has happened over the past week, we are definitely worried about the fans.

“The Albanian and Swiss fans, who came to watch the match on Friday, were polite and well behaved, but I do not think the English will be the same, especially after what I have seen in the newspapers.

“Lots of shops have closed because they are worried about violence; it is a real shame for Lens.

“We have a big screen here so we are expecting lots of fans, although with the bad weather and rain people do not seem to be around at the moment. It seems fairly quiet. Maybe it’s too early for the English. We will see what happens.”

But not everyone in Lens has decamped as far as away as possible for the day.

Stéphane Vasly, a shopkeeper told The Local: “All of the English supporters have been very nice so far, there’s no bad behaviour at all. I do not actually think there will be problems after the match between police and fans. Perhaps because kick-off is earlier today it will make a difference. We’re staying open all day.”

And a member of staff at the boulangerie Guienne Alain was equally positive.

“Fans have been lovely; we cannot see any signs of trouble at the moment. Judging by the mood, I do not think there will be any problems after the match,” she told The Local.

The whole of Lens, the beleaguered French police, the England team as well as all the good-natured fans will desperately be hoping she's right.

HOOLIGANS
Are fans at Euro 2016 hiding flares in their rectums?
Url copied to clipboard!