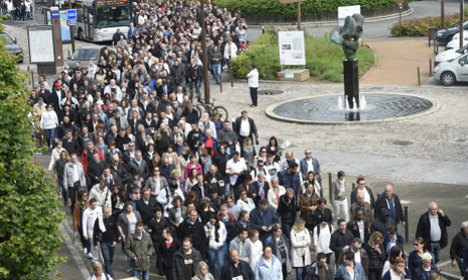 Photo: AFP
Many in the crowd of police, gendarmes, firefighters and locals wept as they walked from the police station where the couple worked in the Paris suburb of Mantes-la-Jolie to their home in Magnanville where they were killed on Monday.
The attack came in the midst of the Euro football championship — already dogged by terror fears — and is the first since Islamic State gunmen and suicide bombers struck Paris in November, killing 130.
“I don't feel a form of fear, rather disappointment,” said Alain, the head of a Parisian police unit who has told his officers to “be careful — we have to change our behaviour.”
Photo: AFP
In Monday's assault, 25-year-old Larossi Abballa, who had served time for links to jihadist networks, killed 42-year-old police commander Jean-Baptiste Salvaing outside his home in Magnanville.
He then entered the house, taking Salvaing's 36-year-old partner Jessica Schneider and the couple's three-year-old son hostage, before slitting her throat.
Schneider was an employee of the police station where her partner worked.
Abballa was later killed in a police raid on the house, where officers found the little boy traumatised but unhurt.
Just before the raid, Abballa streamed a live video on Facebook of himself inside the house with the toddler, urging “other surprises” and pledging to “turn the Euro into a graveyard”.
Paris prosecutor Francois Molins said police had found a hit list at the scene of the attack naming police, rappers and journalists.
Abballa, from Mantes-la-Jolie, told police negotiators before his death that he had sworn loyalty to IS three weeks earlier.
Three others in custody
Three associates of Abballa were arrested over the attack, and theirdetention was on Thursday extended for another 48 hours, a legal source told AFP.
Two of the suspects, aged 27 and 29, were convicted alongside Abballa in 2013 over ties to a network recruiting jihadists for Pakistan.
At the time, Abballa was sentenced to three years in prison.
The French attack came a day after another lone wolf pledging support to Isis gunned down 49 people in Orlando, Florida, highlighting the difficulty in tracking those inspired by the jihadists from afar.
French Prime Minister Manuel Valls on Wednesday rejected criticism that the authorities could have thwarted the assault.
“I will not let anyone say there was any negligence or lack of judgement” by the security forces, he told France Inter radio.
He noted that a lone wolf attack was hard to prevent and repeated a warning that terrorism was an inevitable threat.
“We will experience further attacks in the future because we are facing a terrorist organisation which is on the retreat in Syria and Iraq and which is projecting itself in our countries in various forms… in order to sow fear and division,” Valls said.
“More innocent people will lose their lives. It's very hard to say this… but unfortunately it is the truth,” he said.
Url copied to clipboard!