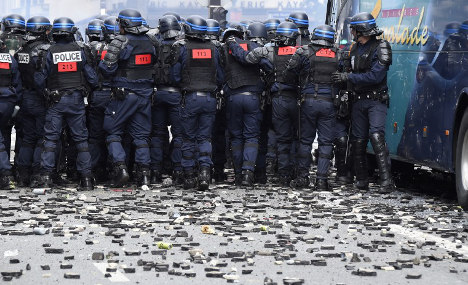 “When you throw concrete blocks at police officers, it’s because you want to kill them.”

Valls was talking the morning after the latest anti-labour reforms protests descended into violence once again, with cars burned, police officers attacked, shops ransacked and even a children’s hospital vandalised.

In a crowded field of despicable behavior this wins. Who does this to kids? https://t.co/DLk36HlbtP

“We can no longer have this kind of demonstration in the capital. It’s intolerable,” said Valls, speaking outside the hospital Necker in Paris.

Tuesday’s protest, like all the anti-labour law protests that have taken place in recent weeks, saw a large majority of peaceful demonstrators march through the streets to express their anger at the government's plan to free up the labour market.

But once again some “700 to 800” hard core rioters, known as casseurs or literally breakers, joined them – but they were intent on destruction on property rather than any bill.

The casseurs, who are generally from extremist anti-capitalist and anarchist groups, who are not interested in the intrracies of the labour laws, just the capitalist system in general.

And they want to “break” it. They opt for a scorched earth policy to destroy all in their path and they did so well into the night onTuesday.

Some 29 police officers were left injured along with over a dozen protesters by the end of the day.

Asked on radio about whether he will now consider banning the marches, Valls was hesitant, saying the government would look at them “case by case” because they “could not simply impose a general ban”.

“We will take our responsibilities,” he said. But later the French president François Hollande issued a stronger statement threatening to ban the protests.

“At a time when France is hosting the Euro (football tournament), when it is faced with terrorism, demonstrations can no longer be authorised if property and people and public property cannot be safeguarded,” Hollande's spokesman Stephane Le Foll told a cabinet meeting.

Yet many are surprised the government has not done so already, given the fact fact the marches have repeatedly ended in wanton vandalism and given everything else that is going on in France right now.

@TheLocalFrance How are manifs like this allowed during a state of emergency? With high terror alerts? It's madness.

On Wednesday PM Valls called on the CGT union to stop organising mass demonstrations in Paris. The hardline trade union was supposed to have boosted its own internal “service d’ordre” which normally prevents demonstrations from getting out of hand. But in Paris on Tuesday the CGT's own “police” appeared overrun and unable to cope with the ferocity of the casseurs.

“Each time there’s a demonstration, we see these casseurs. When you’re not capable of organising protests, then you don’t organise them,” said Valls.

The French police are clearly under the kosh right now, with the ongoing threat of terrorism, the outbreaks of football hooliganism during Euro 2016 and the protests.

One person joked that the police force will soon run out of tear gas, given that they have used so much in recent days against football supporters and protesters.

“We are confronted by a terrorist threat and we have Euro 2016 in difficult circumstances. In these heavy circumstances, everyone must take their responsibilities,” Valls added before vowing that the labour reforms would not be scrapped.

But the CGT and other unions fighting to prevent the labour bill becoming law have vowed to carry on their fight.

More protests are planned later in the month as the bill makes its way through the Senate and back to the National Assembly.

The French government knows that if they ban protests they will risk antagonising opponents even more. And come next spring they will need their votes in the presidential and then legislative elections.

So it looks like the casseurs might have more of their fun in the sun this summer.