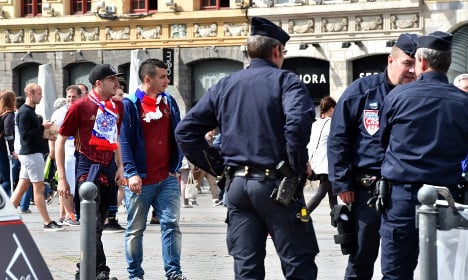 Photo: AFP
“The Russian foreign ministry summoned the French Ambassador Jean-Maurice Ripert,” the ministry said, warning that “further stoking of anti-Russian sentiments… could significantly aggravate the atmosphere in Russian-French relations.”
Earlier Russian Foreign Minister Sergei Lavrov on Wednesday slammed the detention of Russian football fans attending Euro 2016 in France as “absolutely unacceptable”.
“It was an absolutely unacceptable incident when a bus with more than 40 Russian fans was stopped by police,” Lavrov said.
French police on Tuesday took a group of 43 Russian supporters into custody near Marseille over clashes before and during Russia's match against England on Saturday.
French police “demanded that they get off the bus for document and identification checks,” Lavrov said in parliament.
The minister said the French authorities had not informed the Russian embassy or the consulate in Marseille before intercepting the bus transporting Russian fans, who included far-right sympathiser Alexander Shprygin, who heads the Russian football supporters association.
Lavrov said Russian diplomatic missions in France only learned of the incident from social media after Shprygin and other fans published pictures and updates about their detention.
Football's European governing body UEFA have told Russia they will be disqualified from the tournament if there is any more crowd trouble in thestadium.
Russia play Slovakia in Lille on Wednesday in their second match of the championship.
Russian authorities have accused France of failing to curtail clashes between fans in Marseille and have stressed that England supporters were also to blame.
Lavrov conceded it was “unacceptable to behave like some of our citizens” but criticised the “provocative” behaviour of England fans.
“We cannot turn a blind eye to the fact that (the French) are trying to ignore the absolutely provocative actions of fans from other countries,” Lavrov said, apparently referring to England fans.
“You probably saw the outrageous scenes on television of them trampling on the Russian flag and screaming insults directed at the Russian leadership and leading Russian athletes,” he said.
Kremlin spokesman Dmitry Peskov said Wednesday he hoped the investigation into the clashes would treat all sides fairly.