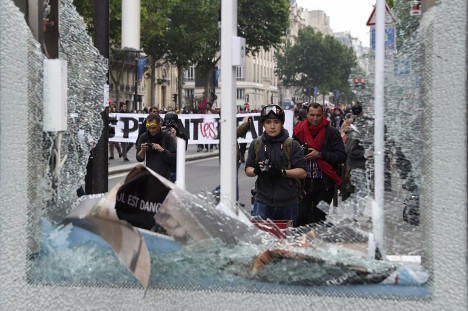 All photos: AFP
Protests turned violent in Paris once again as an estimated million people were expected to demonstrate against labour reforms nationwide.
Police said that “several hundred” masked demonstrators hurled objects at officers, clashes that left 26 people injured and 15 arrested. Twenty officers were among the injured.
Read updates from the protest here
Here are some of the most shocking images from the afternoon. At least two people have been reported as seriously injured. Bicycles are torched along the main roads of the demonstration. A police officer kicks away a smoke bomb. A protester who has been injured in the melee.