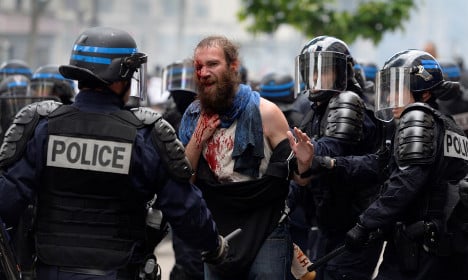 Police officers detain an injured demonstrator during a protest against the French government's planned labour law reforms, on June 14, 2016 in Paris. Photo: AFP
The latest protest against the government's unpopular labour laws turned ugly in Paris on Tuesday.
By late afternoon, police said that 15 people had been arrested and 26 people had been injured – 20 of whom were police officers.
Police were forced to bring in a water cannon after they said “several hundred” masked demonstrators hurled objects at them, at what had been tipped as being the biggest national protests in months.
Demonstrators stormed a building site, taking wooden palettes and then throwing them at riot police, Paris authorities said, while tweets from the scene showed damage to storefront windows along the route of the demo.

The video embedded in the tweet below appears to show a protester kicking a police officer in the back as he runs away.

A live video stream from a journalist at Le Monde newspaper showed what appeared to be protesters repeatedly firing flares directly at police, who retreated against a wall.
At least two people sustained injuries in the clashes, according to an AFP journalist at the scene, and French police said they had made six arrests.
Philippe Martinez, secretary-general of the far-left CGT union that has spearheaded the strikes, said that the union had laid on more than 600 buses to transport demonstrators to Paris.
Read Also: IN PICTURES – Paris labour reform protest turns ugly An injured protester gestures during the protests on Tuesday. Photo: AFP
At least a million people are expected to demonstrate in France throughout the day, the union claimed.
Paris police chief Michel Cadot said he expected “maybe more than 50,000 demonstrators” in the capital. Authorities have banned around 130 people suspected of being troublemakers.
Marchers took off from Place d'Italie to the south of the city earlier in the day in the direction of Invalides on the Left Bank, with many protestors quick to share their dissatisfaction with the labour law.

Protesters chant in French “Who are the hooligans? They are!” @TheLocalFrance pic.twitter.com/PJrZxAXc4U

“Fuck the labour reforms and fuck the government. They can not dictate our lives. This is not a police state. We will continue to fight for change,” a group of three protesters wearing all black and black handkerchiefs up to their noses told The Local.
Others were less aggressive with their language, but shared a similar sentiment.
“There are so many things wrong with the labour law; most of all that it is dictated by the state,” Yves, who works at the City Hall, told The Local.
“I am here because of the freedom of workers and the freedom of the people. I think this is the last chance – after this everyone will go on holiday and that will be that.”

Some protesters smash the glass-cased map on a public toilet and graffiti an “A” above it @TheLocalFrance pic.twitter.com/URl9ylvLRE

A 56-year-old woman who travelled from Provence to participate in the strikes said she was concerned for the future of France.
“The new labour reforms will cause unemployment and affect all of us who work here in France. We can not let that happen. We will not stop protesting until there is a change. Who knows how long this could go on,” she said.
The protests come as France hosts the Euro 2016 tournament.
At a time when the French capital would normally be reaping the benefits of high-season tourism boosted by the football, the demonstrations have dampened the flow to the world's most-visited city. Philippe Martinez taking part in the protests on Tuesday. Photo: AFP
Several staff at the Eiffel Tower went on strike, leaving insufficient numbers to open the monument safely, according to its operator, SETE.
Adding to the climate of discontent, rail workers launched strike action to protest working conditions. They were joined at the weekend by a minority of Air France pilots.
The pilots' strike, which affected about one in five flights according to the airline, is set to end Tuesday but the rolling strike at national rail company SNCF marked its 14th day on Tuesday.
The strike is the latest in months of industrial action that has seen air and rail transport severely disrupted, fuel shortages and rubbish piled up on the streets of Paris.

“I've been to all the demos since March because I want to live in dignity, not just survive,” said Aurelien Boukelmoune, a 26-year-old technician marching in Paris.

“I want the reforms to be withdrawn, pure and simple. Only then will it stop. For the government's sake, they should withdraw the law, otherwise we'll block the economy.”

The CGT laid on more than 600 buses to transport demonstrators to Paris and unions said around one million people had joined in. Police and unions gave wildly different figures for the turnout, with union claiming 140,000 in Marseille compared to 5,000 estimated by authorities.
Paris police chief Michel Cadot said he expected “maybe more than 50,000 demonstrators” in Paris alone on Tuesday.Two further protest days are set for later this month.

With France on high alert over fears of attacks during Euro 2016, overstretched security forces had feared the demonstrations could turn violent and banned 130 known troublemakers from taking part. The terrorism threat was thrust back into the spotlight after a man claiming allegiance to Islamic State jihadists killed a policeman and his partner at their home in a northwestern Paris suburb late Monday.

The latest in a wave of protests that began in March coincides with a French Senate debate on the reforms, which are aimed at making the job market more flexible and reducing high unemployment but which critics see as too pro-business.

President Francois Hollande's Socialist government has voiced hope the latest day of protest will be a last stand for the movement.