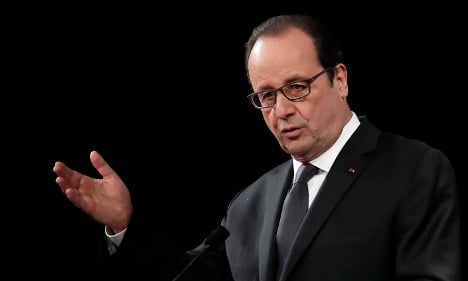 In Orlando, “it is America that has been hit but it is also freedom, the freedom to choose one's sexual orientation and to determine one's style of life”, Hollande said in condemning “the appalling homophobic killing in Orlando.”

Hollande was speaking as he left the US embassy in Paris on Monday, where he had expressed France's condolences over the massacre in Orlando at the weekend that left 50 dead including the gunman.

The comments, in front of television cameras and released later on the president's Twitter account, immediately sparked a storm on social media, with many pointing out that sexual orientation is innate and not a lifestyle choice.

“Francois Hollande tweets that homosexuality is a choice! No, what country are we living in?” said one tweet.

“Hollande talks about 'the freedom to choose one's sexual orientation.' Can someone explain it to him?” said another.

The president's office quickly replaced the offending phrase with “freedom to live your sexual orientation and choose your style of life.”

But the French press was virtually unanimous on Tuesday in accusing Hollande of committing a “gaffe”.

“Francois Hollande learns that one can choose one's words but not one's sexual orientation,” quipped the newspaper Le Monde. Europe1 radio station described his comment as “a huge blunder.”

In his first reaction to the killings on Sunday Hollande had condemned the “horrific” attack in Orlando, without mentioning that it was homosexuals who were targeted.

French Prime Minister Manuel Valls said later on Twitter that “by hitting the gay community, the terrible attack in Orlando touches all of us.”

Gunman Omar Mateen, a 29-year-old US citizen of Afghan descent, killed 49 people and wounded another 53 before he was killed when police stormed the Pulse, one of Orlando's most prominent gay venues, early Sunday. The Isis jihadist group said the attack was carried out by an Isis “soldier”.