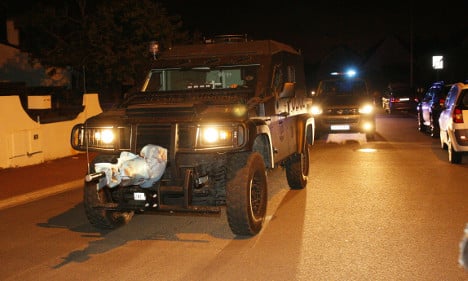 Photo. AFP
A man who claimed allegiance to the Islamic State group stabbed a French policeman and his partner to death on Monday night before he was killed in a dramatic police operation, sources close to the investigation said.
The brutal murder has been labelled an “appalling act of terrorism” by France's Interior Minister Bernard Cazeneuve on Tuesday morning.
President François Hollande then told reporters that the couple had been killed in a “cowardly act, that was unquestionably a terrorist attack”.
Hollande reminded the country that they faced a “very significant terror threat”.
Earlier a news agency linked to Isis said the attack had been carried out by an “Islamic State fighter”, days after posting a similar claim following the massacre at a gay club in Orlando, Florida.
The suspect behind the French policeman's killing was named as 25-year-old Larossi Abballa, who had known Jihadist links.
French prosecutors have launched an anti-terror probe after the policeman and his partner were killed at their home in the Paris suburb of Magnanville.
Witnesses told investigators the man may have shouted “Allahu akbar” (God is greatest) as he stabbed the policeman repeatedly outside his home before holing up inside with the woman and the couple's three-year-old son.
Loud detonations were heard at the scene as elite RAID police moved in following failed negotiations with the attacker, who claimed allegiance to Isis while talking to officers, sources close to the inquiry told AFP.
“The anti-terror department of the Paris prosecution service is taking into account at this stage the mode of operation, the target and the comments made during negotiations with the RAID,” one source said.
The SITE Intelligence Group, a US-based monitor, cited the Isis-linked Amaq News Agency as saying on its Telegram channels: “Islamic State fighter kills deputy chief of the police station in the city of Les Mureaux and his wife with blade weapons near #Paris.”
Sources have told Le Figaro newspaper that the suspect was already known to French intelligence services after spending time in prison for being a member of a jihadist recruitment group. At the nearby art and theatre school Ecole des 4 z’Arts, a receptionist told The Local on Tuesday morning that she'd just heard the news and she was shocked.
“You never think it’s never going to happen where you live,” she told The Local.
A worker at the nearby Taxi Belaid service was lost for words.
“I don't even know how to talk about it, it's dreadful,” he told The Local.
The killing came after a gunman claiming to be acting in the name of Isis shot dead 49 people at a gay nightclub in Orlando, Florida on Sunday in the worst mass shooting in US history.
The bloodshed also comes as France hosts the Euro 2016 football tournament under tight security — still reeling from jihadist attacks in Paris last November that left 130 people dead.
The attacker was yet to be identified and neither of the victims was named, but the slain policeman was known to be 42 years old and worked in nearby Les Mureaux.
His partner was a local police official. (AFP)
Hollande condemns 'odious' attack
President Francois Hollande said in an earlier statement that he “strongly condemned this odious act”.
“A police commander and his partner, a civil servant at the interior ministry, were shamefully murdered this evening,” Hollande said.
“All light will be shed on the circumstances of this terrible tragedy,” he added, announcing a meeting of top officials at the presidential palace early Tuesday.
Officers found the woman's body when they stormed the house, and the attacker was killed during the assault, interior ministry spokesman Pierre-Henry Brandet said.
The couple's toddler son was “in shock but unharmed,” a prosecutor added, saying the boy was receiving medical attention
Police sources had told AFP earlier in the evening that the attacker had taken the policeman's partner and son hostage after stabbing the officer to death as he returned home around 9:00 pm (1900 GMT). (AFP)
Residents were quickly evacuated from the neighbourhood as police moved in and blocked off roads, an AFP journalist said.
RAID officers “arrived rapidly on the scene. Negotiations were launched and an assault plan was put in place,” said Brandet.
But the negotiations were “unsuccessful” and authorities decided to launch an assault around midnight, he added.
A helicopter was on the ground a few hundred metres away from the scene of the attack, while several fire trucks and ambulances were seen leaving the security perimeter.
Interior Minister Bernard Cazeneuve expressed his “infinite sadness” at the death of the policeman and his partner, but praised the “great composure and great professionalism” of the elite officers.