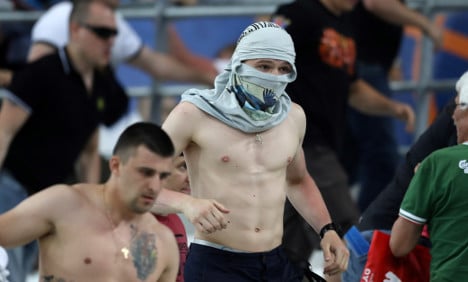 A group of Russian football supporters is being thrown out of France because it is feared they will cause trouble at
Euro 2016 matches, authorities said on Tuesday.

The individuals could appear in court over fan violence in Marseille, officials said Tuesday.

The supporters could either be charged over Saturday's violence involving Russian and English fans, or released, or expelled from France, Adolphe Colrat, the top local official in the Alpes-Maritimes area said.

It comes as UEFA hit the team with a “suspended disqualification” over the violent behaviour of their fans inside the stadium during Saturday night's match with England. That means they will be ordered out if there is more crowd trouble in a stadium at the tournament.

Authorities were checking the identities of 29 supporters at a hotel near Marseille in southern France, but authorities have already decided to take some of them to a holding centre at the border, local authorities told AFP.

French police are checking to see if any of the Russians are on a list of supporters “considered a risk”, said Francois-Xavier Lauch, another official in the Alpes-Maritimes area.

It is believed the supporters intended to travel to the northern city of Lille, where Russia play Slovakia on Wednesday.

French Prime Minister Manuel Valls, said on Tuesday that some people “will be deported because some people cannot stay on national territory”.

In an apparently separate incident Reuters reported that Alexander Shprygin, the notorious far right head of a Russian supporters’ group, said French riot police had stopped a bus carrying fans in the town of Mandelieu near Cannes, who were on their way to Lille.

Shprygin told Reuters: “They want to deport almost 50 people including women who did not take part in anything. The police are making up for their mistakes three days ago. We are in a bus in Cannes and we have been blocked in by riot police.”

In separate tweets sent out later Shprygin said: “Not one person who took part in the [sic] Marseille violence has been apprehended but instead they’re deporting the whole Russian supporters union in three days.

“We’re not getting off the bus. A complete farce,” he added.

The checks on Russian nationals come after the English Football Association expressed concern that French authorities were not doing enough to crack down on Russian hooligans. The move to expel the fans comes after clashes between Russian and English football supporters in Marseille at the weekend, before the two teams clashed in their opening Euro 2016 clash.

Groups of hardcore Russian hooligans marauded through the city attacking England fans seemingly randomly. Some 35 people were left injured, most of whom were British nationals.

Local French youths were also involved in clashes with England fans. Hundreds of England yobs were also seen throwing bottles and chairs at police over the three days. On Monday two were handed prison sentences.

Videos uploaded to social media showed shocking scenes of violence, that police and authorities said was unlike anything they had witnessed before. On Monday French prosecutors admitted that some 150 hardcore Russian hooligans escaped arrest after the weekend of violence.

Most of the English fans were injured after being set upon by “heavily trained” Russian hooligan gangs intent on violence.

But prosecutors admitted that despite the presence of over 1,000 police in Marseille, the hooligans escaped arrest.

“They came to fight. We are viewing the monitoring images to identify the perpetrators of violence,” said Robin.

Following Saturday's violence there are fears that there may be more outbreaks of trouble with England set to play Wales in Lens on Thursday afternoon, with Russia playing the previous evening against Slovakia in nearby Lille.