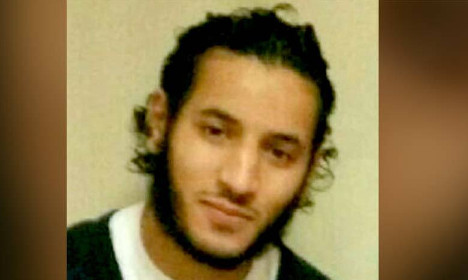 Larossi Abballa, the suspect behind the 'cowardly terrorist murder' of a French policeman and his wife. Photo: AFP

A man suspected to have killed a French policeman and his partner in a terror-linked attack had been sentenced in 2013 for taking part in a jihadist organisation with links to Pakistan, sources close to the probe said on Tuesday.

The policeman and his partner, who also worked as an official in a police station, were killed at their home in the northwestern Paris suburb of Magnanville late Monday.

The attacker was identified as Frenchman, 25-year-old Larossi Abballa. He had claimed allegiance to the Islamic State group, sources close to the investigation said earlier.

Abballa had reportedly been sentenced to a three-year term — six months of which were suspended — for “criminal association with the aim of preparing terrorist acts,” in a trial with seven other defendants.

Later AFP reported that he was part of an investigation over a French network that was involved in sending fighters out to Syria.

Abballa was also known to police for several other non-terrorist related criminal offences. Sources in the intelligence services have told Le Parisien newspaper that Abballa, who was killed in the police raid, did not appear to be a threat.

Parisian criminal lawyer Hervé Denis, who defended one of the other defendants involved in the Pakistani jihadist network in 2013, told l’Express newspaper that Abballa was “neither intelligent nor brilliant.”
“It was a network of lame ducks with intellectually weak individuals as recruits,” he said. (AFP)
Abballa lived in nearby Mantes-la-Jolie, where the policeman had previously worked and where the man's wife worked as a police official. On Tuesday morning raids were carried out at his home.

Abballa had claimed allegiance to the Islamic State group, sources close to the investigation said earlier.

France-based Jihadist specialist David Thomson said the attacker filmed his victims and posted images of them to his Facebook page.

He also posted a 15 minute video in which he claimed responsibility for the attack, Thomson said. On Tuesday morning  the Facebook account was suspended.

At the start of the recording, the 25-year-old convicted radical swears allegiance to Islamic State leader Abu Bakr al-Baghdadi.

He then calls on other Muslims to attack “police, journalists, public figures, prison guards and rappers,” listing around a dozen well-known figures by name.

“We will turn the Euro into a graveyard,” he threatened, four days after the start of the football championships in a country on high alert after last November's jihadist carnage in Paris.

Cazeneuve has described the killing as an “appalling terrorist act. and said that more arrests would be made in the hunt for any accomplices.

The minister then defended the work of French intelligence services saying that 100 potential suspects had been arrested in 2016.

#newsgraphic Map showing Magnanville, France, where an policeman and his partner died in an attack Sunday @AFP pic.twitter.com/MRuHrKzrt3

“This highlights the intense activities of the counter-terrorist services,” he said.

Witnesses told investigators the man may have shouted “Allahu akbar” (God is greatest) as he stabbed the policeman repeatedly outside his home before holing up inside with the woman and the couple's three-year-old son.

Loud detonations were heard at the scene as elite RAID police moved in following failed negotiations with the attacker.

According to reports the attacker only wanted to talk about religion with police, who refused and therefor decided to launch the raid, in which the attacker was killed.

During those negotiations however he claimed allegiance to Isis, sources close to the inquiry told AFP.

The couple's toddler son was “in shock but unharmed,” a prosecutor added, saying the boy was receiving medical attention.

A news agency linked to Isis said the attack had been carried out by an “Islamic State fighter”, days after posting a similar claim following the massacre at a gay club in Orlando, Florida.