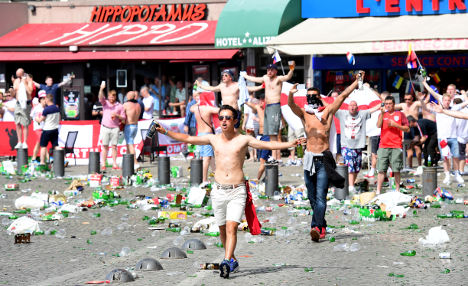 French authorities said they have detained 63 people linked to violence since the start of Euro 2016 and gave police new powers to ban alcohol around stadiums.

Some 116 have been arrested and five individuals, including three English fans will go before a judge in Marseille on Monday.

After a crisis meeting on Sunday the Ministry of Interior said new measures would also be taken to prevent “dangerous” supporters from entering stadiums and more preventative action would be taken to keep different groups of supporters apart before the match.

The ministry said cooperation will also be stepped up with foreign police officers working in France to spot troublemakers.

European football's governing body UEFA warned both England and Russia could be kicked out of the tournament following three days of clashes in Marseille between their fans.

Tensions between supporters of the two countries came to a head inside the Stade Velodrome after Saturday's 1-1 England-Russia draw.

Thirty-five people were injured in the worst violence at an international tournament since the 1998 World Cup in France, with three still in a serious condition.

UEFA has laid charges against Russia, accusing their fans of crowd disturbances, racist behaviour and throwing fireworks and missiles in the Marseille stadium.

A decision on sanctions is to be announced Tuesday.

The UEFA executive committee also said “it will not hesitate to impose additional sanctions” on the countries, “including the potential disqualification of their respective teams from the tournament, should such violence occur again”. But the European body did say that security has to be improved.

“There were segregation issues at Stade Velodrome and (UEFA) will implement corrective measures to strengthen the deployment of security personnel at stadiums.”

The French government gave police chiefs powers to ban alcohol sales and consumption from the day before matches near the 10 stadiums and fan zones being used for the month-long, 24-nation tournament.

The interior ministry said Sunday that 116 people had been questioned in relation to violence since the start of the tournament, of which 63 were taken into custody.

Three of those were expelled from France, while five others had been flagged as a threat to public order and banned from entering the country, the ministry said in a statement.

There were new violent incidents Sunday, as German football fans clashed with Ukrainian supporters ahead of their Group C game in Lille.

More than 50 known German hooligans were involved in the fighting, according to a German police source quoted by the SID sports news agency.

And in Paris about 50 French youths dressed in black taunted Croatian supporters, with the two sides throwing missiles and fireworks at each other before police moved in. French authorities are now on red alert for Russia's next game in Lille on Wednesday against Slovakia.

England's next Group B game against Wales in nearby Lens on Thursday has already been classed as a high-risk game by authorities.

The British government said it was “deeply concerned” by the Marseille violence and offered to send more police to France.

The English Football Association urged fans to be “responsible and respectful” in a statement from its chief executive.

Russian Sports Minister Vitaly Mutko said his country's fans “behaved improperly” and predicted UEFA would impose a fine this week. He also laid the blame on match organisers for failing to separate supporters.

England fans said Russian rivals lit flares towards the end of the game and crossed barriers intended to separate the two groups.

Assistant chief constable Mark Roberts told the Guardian that “a small minority” of England fans were out to cause trouble at the match, but said there were hundreds of “Russian troublemakers”.

In the two days before the game, hundreds of supporters who had been drinking heavily pelted each other with cafe chairs, bottles and stones in theVieux-Port area of Marseille. Witnesses said French youths were also involved.

More than 1,200 riot police fought to control the crowd with tear gas.