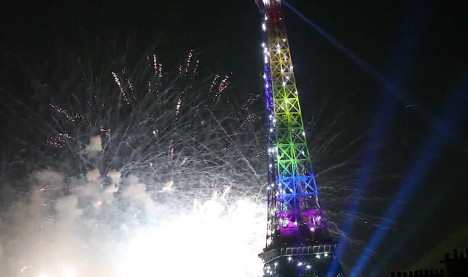 The Eiffel Tower was lit in the colours of the rainbow flag during the Bastille Day celebrations in 2013. Photo: YouTube Screengrab

This time it's Paris that will show solidarity with the victims of a terror attack elsewhere in the world.

The Eiffel Tower will be lit up in the rainbow colours of the gay flag in solidarity with the victims of the shootings in Orlando, Paris Mayor Anne Hidalgo tweeted.

The City Hall also raised the Stars and Stripes and the rainbow flag on Monday, with Hidalgo expressing her “compassion, solidarity and affection” for the American people after the massacre.

On Monday morning, Paris councillors observed a minute of silence for the victims of the attack.

On Sunday night, around 100 people gathered for a spontaneous vigil in Place Igor Stravinsky in the fourth arrondissement, not far from the city's gay quarter.

People stood draped in the rainbow flag, as one woman held a sign that read “To Orlando, we have love”.

Ian Brossat, the capital’s deputy mayor for housing, was also at the vigil and tweeted that homophobia was deadly and needed to be met head on. President Francois Hollande reacted “with horror”, expressing “the full support of France and the French people to the US authorities and the American people during this ordeal”, a statement from the Elysee Palace said.
Prime Minister Manuel Valls also expressed his “compassion” and “solidarity” with the American people.
“By striking the gay community, this terrible Orlando attack reaches us all,” he wrote in French on Twitter.

The French football team also tweeted a message of support, along with a picture of a ribbon combining the colours of the US and rainbow flags.

“Sometimes football counts for little. Thoughts for #Orlando,” the team which is among 24 competing at the Euro 2016 championships in France wrote, adding in English “Together we stand.”

The planned light tribute at the Eiffel Tower recalls the global show of solidarity with the French after the jihadist carnage in Paris in November.

In the aftermath of the attacks, monuments from One World Trade Center in New York to the Sydney Opera House in Australia clad themselves in the colours of the French flag.

IN IMAGES: World comes out in solidarity after Paris terrorist attacks Due to conflicting reports, an initial version of this story incorrectly stated that the Eiffel Tower would be lit in the colours of the US flag.