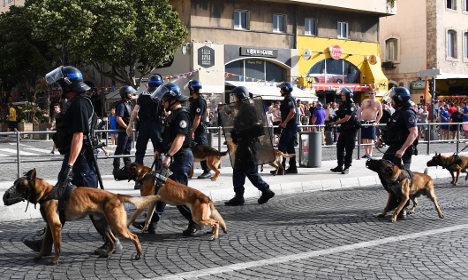 For months the build up to Euro 2016 was dominated by one subject – the threat from terrorism.

Yet by time the weekend was over it was the old plague of hooliganism that had returned with a vengeance to haunt a football tournament.

There were skirmishes in Lille between German hooligans and Ukrainian fans and in Paris between local hooligan groups and Croatian fans.

While the blame has rightly been dished out to the fans for their role, the focus has also fallen on the French police and their ability or perhaps inability to deal with and stamp out the trouble.

'For French police it was interesting to see us fight'

Even a Russian thug, who spoke to AFP suggested the French police were somewhat limp in their response.

Vladimir said he thought that French police were passive during the outbreaks of violence.

“I got the sense it was interesting for them to see the Russians fight the English. They intervened at the last moment.” The head of the French police’s anti-Hooligan unit Antoine Boutonnet (see photo below) drew ridicule in his home country when hours after the violence in Marseille on Saturday, he declared there had been “no failure” on the part of the police.

Local Marseille police chief Laurent Nuñez, also invoked ridicule when he too insisted that there had been no error in the police operation and commended the work of his colleagues.

Boutonnet said the problem for the trouble lay with alcohol and suggested if the police had not taken pre-emptive measures then there would have been “an extremely complicated situation”. You only needed to look at the shocking images from Marseille to realise that the situation in the Mediterranean city was incredible “complicated” on Saturday, not least for the vast majority of supporters who went there simply to watch football.

One English fan told The Local it was “horrific” with those who there for the football left with no idea where to go in order to be safe, such was the chaos caused by “English idiots, Russian ultras and a brutal reaction from the police”.

Boutonnet’s claim that the French police had responded “effectively” made him a laughing stock online, with people even calling for him to resign.

“When Boutonnet talks about alcohol, it reveals all his incompetence and ignorance,” tweeted one stunned Frenchman.

There was no suggestion the Russian hooligans who marauded through Marseille on Saturday had been drinking, nor the French youths who launched attacks on fans in Nice, Marseille and Paris.

The fact that thousands of Irish and Sweden fans drank heavily and sung heartily together in Paris on Saturday night shows there’s far more to the violence than alcohol.

Yet on Sunday France’s interior ministry said alcohol bans would be imposed in host cities, before and during matches.

The measure however may do little to prevent more trouble. While the French police have been under pressure for months due to the state of emergency and terror threat, many believe they are just not prepared for the problem of fan violence.

Respected French football journalist Pierre Ménès argued that French police are just not used to dealing with large crowds of potential or real troublemakers because often in France, authorities prefer to ban rival supporters from stadiums rather than deal with them.

“When we don’t even want to accept the responsibility of supporters travelling in Ligue 1, how can we have any chance to manage these situations?” wrote Ménès. “Uefa is currently investigating and threatening the qualification of two nations. But in France, we must use this to reorganize the relationship between police and supporters.

“All this does not give a pretty picture as its inability to deal with these acts of violence was evident,” Ménès said.

Recent weeks have seen violent clashes with French police and protesters across France that had some people asking the question how could they possible deal with hundreds of football yobs.

At the weekend French riot police were criticised for their tactics of handling the violence, with their preferred method appearing to be to just throw tear gas into the crowds.

Many expected the number of arrests to be far higher too. On Monday only ten individuals will face trial for offences linked to the trouble – six British nationals, three French and one Austrian. Some 20 people were arrested in total over the three days.

Concerns have also been raised that the 1,100 French police on duty for the match, was not enough given that a Marseille vs PSG grudge match has in the past seen 2,000 officers drafted in.

The problem French police face now is that there remains more high risk confrontations in the days and weeks to come.

Not least on Thursday when England play Wales in Lens, a day after Russia plays Slovakia in nearby Lille.

Other potential flash points could German versus Poland in Paris on Thursday. British authorities have already offered to send more officers to France to help with policing.

Professor Geoff Pearson from the university of Manchester said French police need to take some advice from European colleagues.

“My advice to the French police is to listen to your European neighbours, regarding the tactics used at events involving many people. Adopt a more positive attitude towards the fans. Tear gas and batons, would not be the first gesture towards a football fan,” Pearson told The Guardian.

When asked about how he would deal with hooligans in an interview with The Local in the run up to the tournament French police chief Boutonnet talked of them not being able to travel to France.

It appeared that French authorities were just hoping that the yobs just wouldn't be able to come to France and had perhaps not really prepared for what to do if they got here.

With French police refusing to admit any error on their part and with hundreds of thugs clearly having made it to France, it doesn’t bode well for the prospects of peace breaking out at what is supposed to be a football tournament.