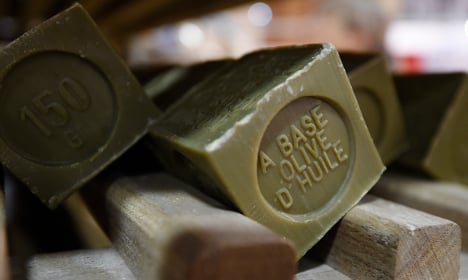 A dispute over how “true Marseille soap” should be made has the producers themselves at each others' throats. Photo: AFP

With cheap Chinese and Turkish soaps flooding the market, manufacturers want Marseille soap to be granted a “geographical indication” (GI) so consumers can tell the difference between the real thing and cheap imports.

But a dispute over how “true Marseille soap” should be made has the producers themselves at each others' throats.

In one camp are a dozen soapmakers from across the southeast of France led by the cosmetics giant Occitane who have formed the Association of Makers of Savon de Marseille (AFSM).

It was they who filed the bid in October to have the soap recognised as a GI, a designation which already protects many French wines and cheeses.

In the other corner are four die-hard traditionalists, master soapmakers from the Marseille area itself who want to bring the product back to its artisanal roots.

Their supporters in the Mediterranean city started a petition on change.org that has gotten more than 123,000 signatures to back their demand for a return to something closer to the original recipe, first officialised under the “Sun King” Louis XIV in 1688.

But relations between the two camps are so bad now that the French state is having to arbitrate the vexed question of the soap’s “official” make-up.

“Talks have broken down, our only communication now is through third parties,” said Serge Bruna of the more industrial AFSM.

While they are pushing for the norms for a “traditional savon de Marseille” to be based on vegetable oil and soda ash, they also want certain additives and perfumes to be allowed.

But this is heresy for the traditionalists who make their soaps from scratch in large cauldrons without recourse to ready-made ingredients produced elsewhere.

“We are the last to keep up the traditional know-how,” said Marie Bousquet-Fabre, great grand niece of the founder of the Marius Fabre soapworks.

“We are true soapmakers. We start from the vegetable matter and oil and we transform them by heating them with the soda ash in our cauldrons.”

Marseille soap was original made with sea water, olive oil and soda ash, but for decades olive oil has given way to palm and copra oil.

Even the traditionalists now use some palm or copra oil in their olive soaps. Their lobby group, the UPSM, however, insists that true savon de Marseille can only be produced by artisanal makers in the Bouches-du-Rhone region around the city.

This has angered the rival AFSM whose members are spread over a large swathe of southern France. AFSM stalwart Bruna claimed that the austere pale green and beige blocks of soap made by the traditionalists “are not what 90 percent of consumers want.”

One of the biggest sellers in his Licorne brand’s shop in Marseille’s Old Port is a soap in the shape of a sardine.

For many customers, the lavender oil added to the soap gives it “the essential odour of savon de Marseille“, he claimed.

The French government, however, is taking its time over the decision partly because the Marseille soap will be the first manufactured item to be given the GI status – something that has up to now been reserved for food products.

It hopes it will lead the way for other French regional products like Basque berets, Limoges porcelain and knives from Laguiole getting the same classification.

With a public inquiry into the soap’s composition ending only next week, no official decision is expected until September.

But an advisor to minister of state Martine Pinville, who will make the final decision, said the dilemma for officials was “promoting quality” while opening the GI classification to a “a maximum number of people.”

Sebastien Malangeau told AFP that the ministry was “ready to be as flexible as possible… but the most important criteria is the quality.” If the label is just seen as “a marketing gimmick it will die“, he added.