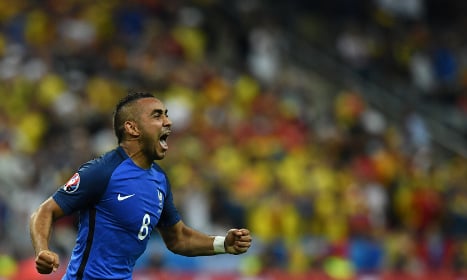 Police were on high alert in the southern city of Marseille, where England and Russia supporters clashed and hurled bottles at officers in a second night of violence before their first game.

Industrial unrest, fears of terrorist attacks and devastating flooding have overshadowed the buildup to the month-long tournament.

But football fans were in good spirits as more than 80,000 poured into the Stade de France in Paris for the opening match between France and Romania on Friday.

The packed stadium erupted with delight, while supporters watching in bars around the city cheered, when Dmitri Payet gave the host nation a stunning 25-metre goal to grab a last-gasp 2-1 victory.

President Francois Hollande hailed the “smooth” start to the tournament on Friday, despite a 10-day train strike that has caused travel disruption across France.

France needs the championships to be “a sporting success” but also “a big event for the people,” said Hollande, wearing a scarf in the national colours of red, white and blue.

Weeks of industrial action over government reforms to labour law had dampened the party atmosphere around the tournament, disrupting rail and metro services and leaving petrol pumps dry in many places.

Arriving fans have been confronted by stinking piles of rubbish left strewn on the streets of Paris and Marseille after strikers began blockading incineration plants.

The head of the CGT union Philippe Martinez, who is spearheading opposition to the labour market reforms being pushed by the government, has vowed not to be “blackmailed with the Euro”.

In another headache, Air France pilots will begin a four-day stoppage on Saturday, just as crowds of foreign fans are expected to begin arriving on French soil.

Air France CEO Frederic Gagey has promised that more than 80 percent of flights would operate.

Still, some fans feared their experience of the tournament might be hindered by the strikes.

“We don't know how we'll get home,” said Emilie Riquier, a 35-year-old fan who had travelled to Paris from the southern city of Nice for the opening game.

Fears of terror attacks have also overshadowed the build-up to the Euro 2016 in France, which has been under a state of emergency since attacks by Islamic State jihadists in November killed 130 people.

The tournament is expected to attract around two million foreign visitors for the matches at 10 venues around the country, posing a major security challenge.

The French government has launched a smartphone app that can alert users to any suspected attack or other disaster according to their location.

Some 90,000 police and private security guards are being deployed to protect players and supporters, including 13,000 in the capital alone, where soldiers could be seen patrolling with submachine guns.

The Paris fan zone at the foot of the Eiffel Tower was only half-full on Friday, according to police, suggesting security fears had dampened the enthusiasm of some fans.

“There is a lot of security here, but it's OK,” said 20-year-old Ruairi Scott from Belfast, downing pints.

“I was a little worried before we came here, but not anymore. I feel safe.”

Further south, stretched security forces in Marseille fired teargas at football hooligans after clashes broke out for a second night ahead of a match between England and Russia.