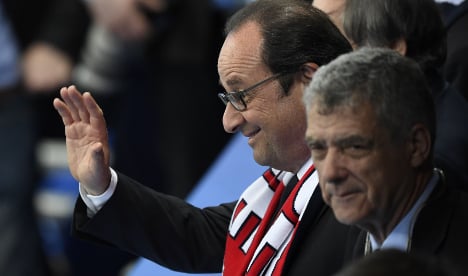 France needs the championships to be both “a sporting success and a big event for the people,” said Hollande, wearing a red, white and blue football scarf ahead of the game against Romania at Stade de France that the home side won 2-1.

Ten months ahead of the next election, and with the country reeling from crisis to crisis, the beleaguered president himself also badly needs a boost.

As hardline unions pressed on this week with strikes that threatened — but in the end, did not — hamper fans from reaching the opening game, Hollande's already-catatonic ratings fell to a new low of 16 percent, according to an Ifop-Fiducial poll.

By Saturday, the feared transport chaos had yet to materialise, and the piles of rubbish sullying the streets of Paris after strikers blockaded incineration plants had been largely cleared.

But even if all the bins are emptied, trains and planes run on schedule and France lifts the title, there will be no glory for Hollande, Gael Sliman of the Odoxa polling firm said.

“No, absolutely not, of course not!,” Sliman told AFP. “We have a president who is extremely unpopular. There can be no substantial benefit for Francois Hollande.”

Ever since 1998, when an unfancied French “black, blanc (white), beur (Arab)” team lifted the World Cup at home, football has been touted as the great healer in a country riven with social and racial divisions.

Politically too, the 1998 victory was seen as a coup for then president Jacques Chirac, who rode the wave by pulling on the national jersey and planting a kiss on the bald pate of goalkeeper Fabien Barthes.

But Sliman and other analysts say that the notion that football saved Chirac, who was on the ropes after dissolving parliament in 1997 and calling elections his party lost, is an urban legend.

They note that Chirac had already begun to bounce back before the World Cup, thanks to an economic turnaround.

“In the case of Francois Hollande, even if the French win, it will only have a positive impact — like in 1998 — if there is a return to growth and a fall in unemployment,” Paul Dietschy, a historian and author of a political history about World Cups, told AFP.

Otherwise, Dietschy said, if France's success is confined to the field, “there will be scenes of jubilation but it's quite ephemeral, like cherry season and springtime.”

While agreeing that Hollande stands to gain little from an incident-free championship, both Sliman and Dietschy agreed he could become even more unpopular if months of unrest over the labour bill drag on during the football.

Polls show a majority of the French blaming Hollande and his uncompromising Prime Minister Manuel Valls for the continuation of the strikes.

For Dietschy, it would “confirm the weakness and lack of authority” of the Socialist government, but would also eventually backfire for union hardliners by turning off the moderate majority.

“Francois Hollande would not be forgiven for spoiling the party by letting the bins overflow and the trains be blocked,” Sliman said.

On a visit to the French team's training camp last weekend, Hollande — who became the butt of jokes in April for saying that “things are better” on the economic front, despite near-record unemployment — was as upbeat as ever.

“There is everything to play for,” he said, noting that “outsiders” often win the day, in remarks seen as much of a comment on his own re-election chances as on the team's prospects.

Dubbed “Mister three percent” a year before he came to power — his score in a poll of Socialist presidential hopefuls — Hollande knows a thing or two about coming from behind.

And he's not taking any advice from Paris Saint-Germain striker Zlatan Ibrahimovic either.

In an interview with Le Monde newspaper the brash Swede said of the French leader: “I could make him popular if I want to — but I'm not sure I want to.”

Hollande's spokesman Stephane Le Foll shot back that “in a great democracy, things are sometimes rather more complicated.”