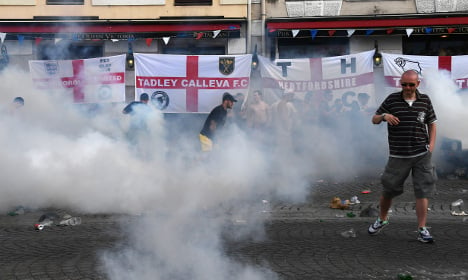 Bottles and other objects were hurled at French police who responded with tear gas. Photo: AFP

France has been on the lookout for potential terrorists, but old-fashioned hooligans opened hostilities at the month-long tournament before the first ball was kicked.

Saturday's England-Russia match was one of five labelled 'high risk' for fan trouble by French authorities. Even a multi-national police intelligence operation could not stop the trouble.

About 250 England fans fought French youths and later clashed with French police on Thursday night on the seafront of the Mediterranean city. Four police were among seven injured.

Twenty-four hours later, at the same venue and after a few more beers, French police had to separate scores of England and Russian fans.

Bottles and other objects were hurled at French police who responded with tear gas. Some fans just sat on the pavement finishing their drinks in the white clouds.

The night ended with hundreds of boozed-up and bare-chested fans standing, beer glasses in hand, staring down French CRS riot police on the other side of the street.

“We are really disappointed by the scenes of disorder in Marseille yesterday evening and condemn such behaviour,” said the English Football Association in a statement calling for “respectful” behaviour.

England fans were also heard chanting “Sit down if you hate the French,” and “Fuck off Europe, we're all voting out.”

Marseille has suffered from England fans before.

There was worse at the tournament.

Before a Germany-Yugoslavia game, a gendarme, Daniel Nivel, was beaten up by German fans and spent several weeks in a coma.

Controlling football fans has become an industry since the 1985 Heysel disaster in which 39 mainly Italian football fans were killed before the European Cup final.

The deaths of 96 English fans at the Hillsborough ground in 1989 — a tragedy now blamed on police –increased the urgency for action.

All seater stadiums have revolutionised the game. Bars and cafes outside remain a social minefield when 80,000 people are gathered even with hundreds of closed-circuit cameras staring down at them.

For Euro 2016, England-Russia, Turkey-Croatia in Paris on Sunday, Germany-Poland at Stade de France on June 16 and Ukraine-Poland in Marseille on June 21 are all considered high-risk games.

Some 180 police from all over Europe have come to France to monitor the beer-swilling troublemakers.

French authorities have set up an International Police Cooperation Centre at Lorgnes in the Paris suburbs where 50 of the foreign police are watching screens and checking photographs.

“They have a precise knowledged of the violence linked to the supporters of their respective countries,” commented France's Interior Minister Bernard Cazeneuve.

The other 130 police are spread around the stadiums and fan zones in Bordeaux, Lens, Lille, Lyon, Marseille, Nice Paris and Saint-Etienne and Toulouse hunting potential hooligans.

The foreign police are allowed to be armed and to wear their national uniforms.

British statistics indicate that football hooliganism is on the rise again. The British National Criminal Intelligence Service (NCIS) says that arrests for football-related trouble have been increasing for the past two years.