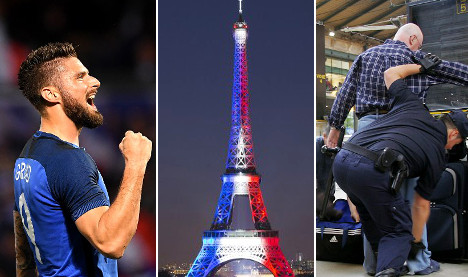 A is for Alcohol bans

In the city of Lens to the north, complete alcohol bans have been put in to place on game days, meaning that from 6am to 6am no one is allowed to have alcohol in public places. Alcohol will still be served in bars and cafes, of course, but don't bother drinking elsewhere.

The Eurostar line between London and Paris will also be banning the consumption and sale of alcohol on some days during the tournament.

And there will be no booze sold in stadiums.

B is for Bag checks

Yes, if you're planning on taking a bag pretty much anywhere – shopping malls, football games, big metro stations – you can expect to have it checked as part of France's mammoth security push. Our advice: Leave it behind! Oh, and expect some frisking too. C is for Crowds

While the exact figure is impossible to guess, there will be between 1.5 million and 2.5 million visitors heading to France for the tournament. Expect some serious delays, congestion, and queues everywhere from the Metro to your favourite pub.

D is for Download the new terror alert app

France launched a new smartphone app on Wednesday to alert users to possible terror attacks.
The application, which is free to download in both French and English, will send users a warning “in case of a suspected attack,” said the interior ministry, which has piloted and introduced the service. E is for Eiffel Tower in different colours

The Eiffel Tower is going to be lit up in the colours of different teams each night, depending on those countries' social media usage.
Tournament sponsor Orange will be monitoring the hashtags across the main social media platforms throughout the tournament to make its decision – so get sharing!

F is for Fan zones

The biggest of all will be beside the Eiffel Tower, with room for 92,000 spectators and with a screen the size of a basketball court. There'll also be fan zones in the ten host cities across France, but none as grand as the one in Paris. Read more about it here.

G is for Geography

Ten cities in France will host the tournament, including some cities you may never have heard about before (Lens, anyone?). Here's a helpful map. H is for Hotel prices soaring

Accommodation in France is not going to be cheap, with hotels and Airbnb's fleecing fans all over the country. In fact, hotels are around 80 percent pricier for the next month.

I is for Iconic rooster

Balthazar the rooster, much loved in France for his emblematic appearances at national sporting events, has been banned from the tournament.

Owner Clement Tomaszewski, pictured below, says he will ignore the ban. J is for Jitters

Yes, the mood in France is jittery to say the least, with many Parisians and tourists still on edge after last year's terror attacks in January and November. French authorities aren't taking any chances for the tournament, however, but while there may be nerves, the mood is far from tense as Thursday's raucous party in the Paris fan zone proved. It will take a few games and hopefully a few goals before the jitters recede.

K is for Kick off

The first match – France vs Romania in Paris – begins at 9pm local time. From then on the group stages will see three games a day on most days with local kick off times 3pm, 6pm and 9pm. Once the tournament reaches the quarter final stage, the kick off times are all 9pm.

For the rest of the kick-off times throughout the tournament, check the official Uefa website here.

L is for Les bleus

The French team is known as Les bleus (or “The Blues”) and they have won the tournament twice, in 1984 and in 2000. This makes them the only country apart from Germany and Spain to have won the championship more than once. And the odds are looking good this year (See “O is for Odds” below). M is for Metro is working

Despite an ongoing strike by Paris transport workers, the city's Metro services is running as normal, which means it's a little cramped, a little smelly, a little sweaty, but you'll get from A to B no problem. Both stadiums in Paris are on the Metro lines. Stade de France – line 13 and Parc des Princes – Line 10 or Line 9.

On Thursday, the government banned football terraces of bars and cafes across France from erecting big screens outside. Officials said there are just too many terraces that make for targets that are too easy. Best to head inside the bar, or to one of the fanzones if you want the spirit of the game. Watching the games on TVs however will be fine. O is for Odds

France is tipped by many to win, with odds as favourable as 3/1. And let's face it, France could do with some good news. Other leading favourites are Germany and Spain. England, Wales, Ireland, Northern Ireland? Dream if you want.

P is for Pilot strikes

Air France pilots look set to go on strike from June 11th, which could prove to be a crippling blow for many tourists looking to come for the tournament (or indeed head home afterwards).

Will the strike go ahead? It's unclear. Check here for the latest details. Q is for Queues

You can expect queues probably wherever you go in France for the next month, particularly in Paris. The gates for the stadiums are set to open three hours before each match, so it's likely the fans with tickets are going to be waiting the longest. But if you think you'll be able to just waltz into the (free) fanzones without waiting, you have another thing coming.

R is for Rubbish

At the time of writing, rubbish is piling up on the streets of Paris, Saint-Etienne and Marseille as union workers are blocking off the garbage depots due to labour union protests. Pooh la la indeed. We can only hope it's over before the visitors are here.

S is for Security

This is essentially the theme of the month, with France doing everything it can to keep fans, citizens, and tourists safe. There'll be more than 90,000 police and security guards on hand nationwide, and you can expect to see heavily armed soldiers on the streets – as there have been for months on end now.

T is for Train strikes

Workers for rail operator SNCF have been on strike for over a week, with around 50 percent of the country's trains affected in some way each day.

Getting around the country is still manageable. You'll just need more time. Strikers have threatened to hit the train lines serving the Stade de France on the opening day. U is for Umbrella

Bring your umbrella. From Saturday onwards, things are looking grim as far as the weather is concerned. Paris will be particularly badly hit, but every single city that’s hosting the games will see rain at some point during next week. Sigh. V is for Voiture (or “car” in English)

With all the train/plane/Metro strikes, you might be best to bring your own car. Or, you could always rent one, or do as the French do and carpool with a service like BlaBlaCar. Bonne chance.

W is for Watching on French TV

If you're stuck in a hotel room or in an Airbnb cottage in rural France then you'll need to find the games on French television. The games have been split by several channels so just try them all – TF1, M6, TMC and beIN sport, which has the rights to all of the games but isn't a free channel, which is basically a disgrace for a tournament in France.

X is for X-rated

As a rule, A to Z's need to have “X-rated” featured somewhere, so here's a guide to the best swingers clubs in Paris for if you get sick of the football.

Y is for Yobs (not welcome)

The French police chief charged with dealing with hooligans said that any English supporters heading to France this summer should think twice if they're planning to cause trouble.

“Anyone who comes to France with bad intentions is not welcome. It's not worth coming. That's clear,” Commissaire Antoine Boutonnet, the police chief in charge of dealing with hooligans, told The Local last month.

Z is for Zlatan

Let's face it, Z was always going to be for Zlatan in a football story. But the Swedish striker is something of a favourite in France, where he has just moved on from after playing for PSG for the past four years. And he's something of a favourite in his own mind too and love a bit of media attention, which is why we can expect to see his face all over the place over the next month.