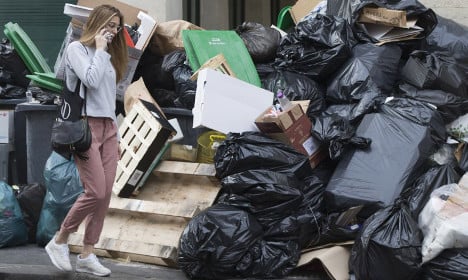 Rubbish piles taller than people have become a common sight in Paris this week. Photo: AFP
With the Euro 2016 tournament kicking off in Paris tonight, Mayor Anne Hidalgo has promised a last-minute solution to the accumulating garbage in the city due to striking workers.
“All the garbage will be picked up,” she told BFM TV on Friday morning.
When asked when exactly it would be removed, she responded “now, today”, adding that garbage workers were already removing the rubbish that has piled up across half the city over the past few days.
She said that 50 extra garbage trucks had been deployed on Thursday to help with the clear up, and an additional 30 on Friday. Rubbish being cleared in the 5th on Thursday afternoon. Photo: Michael Damstrup
The garbage has piled up in ten of the city's 20 arrondissements for several days, with striking workers blockading waste processing centres and blocking access to the rubbish collection trucks.
There have also been pile-ups in Marseille and Saint-Etienne – both of which will be hosting Euro 2016 games in the next month – although there has been no word as to when these might end.
The clean-up in the capital will come as a welcome relief to Parisians, not least after union heads threatened on Thursday that the garbage would continue to pile up until Tuesday.
The strikes are part of a much larger movement that has seen French union members protesting labour reforms that essentially will make it easier for companies to hire and fire employees.
The Euro 2016 tournament kicks off at 9pm on Friday night, with France playing Romania in Paris.

More pictures from the past few days of garbage strikes: A road near Etienne Marcel in the 2nd arrondissement on Thursday. Photo: The Local