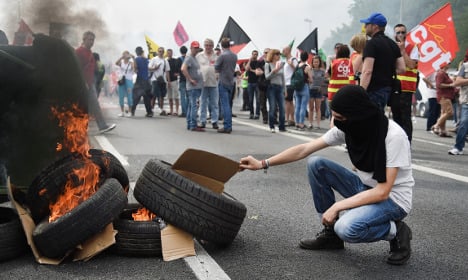 That was the front page headline on French newspaper Le Parisien this week along with a picture of union workers protesting at Gare du Nord.

Strikes and radical protests are of course nothing new in France and the world is already familiar with images of burning tyres, blockades and chief execs stripped half naked by union militants. But the problem France has now is that the eyes of Europe (if not the world – given the popularity of football) are on them. Or more to the point the eyes are not just on them, they are here, in France, for the third biggest sporting event in the world.

'We are being watched by the whole of Europe'

The tournament was, and to be fair still is, a chance for France to shine, to show that it can cope with not just the security issues, but also to demonstrate that it is not a country on its knees, but a largely well-functioning state that is united in the face of a very real terror threat.

“We must be aware that we will be watched by the whole of Europe, and even more than Europe,” said President François Hollande this week, before suggesting strikers who are protesting government labour reforms, could be forced back to work.

But the strikes, which have hit fuel, trains, rubbish collections are continuing even if their impact on daily life has been somewhat exaggerated.

Unions even threatened on Friday to cripple the two train lines that serve the Stade de France, which will host the opening game between France and Romania.

Air France pilots are also set for a four-day walk out. French leaders, the media and public know that the image of their country has taken a hammering. One politician simply called it “disastrous”.

And it may get worse if the tensions don't ease.

'It's already been spoiled'

For Frenchman Jacques Lambert, head of the Euro 2016 organising committee, the festival of football has already been “spoiled” by the strikes.

For their part, unions insist their struggle against the labour reforms that will liberalize the job market, is far more important than a football tournament.

There are worries in France that the impact will go beyond the tournament itself and hit tourism and foreign investment.

Marc Lhermitte from Ernst and Young, which carries out an annual study on the attractiveness of France for foreign investors, believes the recent tensions will only accentuate the view, albeit an inflated one, that France is a country held back by “social instability”.

He says the risk is that foreign tourists and investors see France through a “deformed spyglass” which “exaggerates” the country’s problems.

“They will think have an image of the country as “constantly blocked by trade unions, which is not quite the reality.” The French public are also growing increasingly ashamed. One trade union supporter who had backed the fight against labour reforms told The Local it was “shameful” that they were continuing their strikes now the tournament has arrived.

“These strikes and protests have already started to destroy the image of France,” Parisian Andrea told The Local.

“My friends and family in Italy definitely do not want to visit me after watching the news. Look at those bins. I think that the damage is done – it will be hard to recover from all of this for the summer season.

“I am not scared for France, instead I think it has gone mad.”

It’s not just the image of France being on strike that has been presented to the world, but also one of the country where deep divisions persist.

Unions at war with government, workers versus businesses, the Socialist party at war with itself, but there are also divisions around France’s football team and the country at large.

The team’s coach Didier Deschamps (in he photo below on the left) has been accused of “bowing to a racist part of France” by dropping Karim Benzema (on the right), who was really ditched because he faces charges for blackmailing a former team mate.

Former players and French actors say the country has missed an opportunity to unite the country by not including Benzema and other North African players like Hatem Ben Arfa in the squad.

The row has simply opened up old wounds about the racial make up of the French squad and whether the country’s immigrant population really feel French enough to support the team. There’s still time for it all to change of course.

The lead up to the 1998 World Cup on French soil was dominated by an Air France strike as well as questions about the racial make-up of the team and tension among communities in the country.

The strike ended up being called off on the opening day of the tournament, while the black-blanc-beur (black, white and Arab) team went on to win the tournament and was credited with unifying the country, albeit briefly.

And don’t bet against the image of France recovering in the long run.

A Parisian named Isabelle told The Local: “Tourists will continue to come anyway because France is France. There are still the same things to do, the weather, the culture. Those will never go. It is a phase, but it will pass soon. I am not too worried.

For Isabelle, other countries in Europe are facing bigger problems than France right now.

“It is the same with big companies. They will invest regardless. Some strikes and bins in the street will not completely undermine the economy. If anyone should be worrying about the economy and big enterprises right now, it is the British if they leave the EU.”