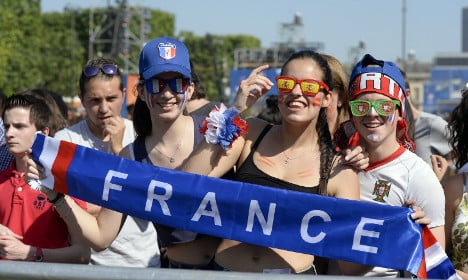 Photo: AFP
When was the last time there was a truly positive front page news story from France?
Here at The Local we're putting aside any and all national loyalties for the next month to back France, in the hope that this currently troubled nation can win the Euro 2016 tournament.
And let's face it, France has had far more than its fair share of devastating news of late.
The build-up to the tournament has been mired by a natural disaster, which saw flooding claim four lives and leave much of central and northern France under water.

This came hot on the heels of months of (ongoing) nationwide strikes that have seen cancelled transport, long-running petrol shortages, and most recently garbage piling up on the streets.
And the ramped-up national security for the tournament serves as a clear reminder to all of November's terror attacks that left 130 dead in Paris. This was as the emotional wounds were still healing from the January terror attack in Paris that left 17 dead.
With all this fresh in everyone's mind, it's time France had some good news, non? Can anyone really begrudge them if they managed to lift the trophy and the mood of a nation.
As an editorial in Le Parisien newspaper put it, the opening match on Friday will provide “a breath of fresh air in a France which has struggled to breathe for months”.
“No, a football match will not erase days of strikes and weeks of tensions. But the prospect of a delightful little digression is enough to leave many of us smiling,” read the editorial.
Like the paper said, a win on the football pitch won't result in union leaders embracing government ministers and declaring a new found love for each other. Nor will it ease the “social and ethnic apartheid” in the poorer parts of the country. Nor will it solve France's identity crisis.
Nor will it stop the far right and divisive Marine Le Pen making it through to the second round of presidential elections next year, as is widely expected.
The World Cup win of France 98 showed that the impact of sporting triumph is just like taking ibuprofen for a broken leg. It can only ease the pain for a while and it won't heal anything.
But every country has its issues. The UK could have left the EU even before its football teams are knocked out of Europe, as they inevitably will be.
The point is a France victory would feel bloody good.
Imagine that feeling of jubilation and national pride that's been missing for far too long. I want to be celebrating on the Champs Elysées with millions of others on July 10th.
And imagine the feeling of solidarité. The last time we saw it was in the aftermath of the Charlie Hebdo attacks when four million marched in defiance. And that was a time of mourning. Even if France, the favourites to win the tournament, don't manage a victory, then many in the country, not least the government and the security forces, would consider a peaceful tournament to be a triumph in itself.
Luckily for those backing France, the nation has history on its side when it comes to winning football tournaments at home.
France won the Euros in 1984 and the World Cup in 1998 – both as host nation – prompting dancing in the streets and a pride that's still talked about today.
Surely, surely it's France's turn for some great news, and hopefully Les bleus are the ones to deliver it.
Allez les bleus. You have our support.