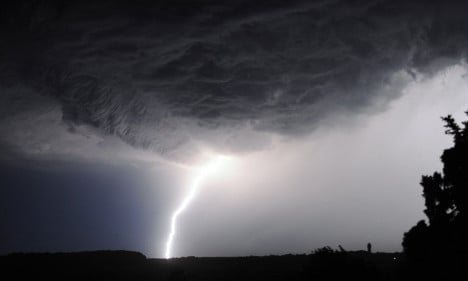 File photo of a storm in France. AFP
National weather agency Météo France has placed three départements in Brittany on orange alert – the second highest grade of alert – ahead of what are predicted to be heavy storms.
The départements – Finistère, Côtes d'Armor and Morbihan – are set to be hit by up to 70 mm of rain, hail, and winds of up to 80 km/hr. Residents have been urged to stay vigilant for the storms, which are expected to continue throughout the day and into the night.
The inland town of Spézet has already recorded 38mm of rain in a three-hour period during the night, the service reported.
The rest of the country is unlikely to escape the rains going into the weekend, the agency added, though no other areas in France are on alert as yet.
Friday afternoon, below, will see the storms moving eastward, though most of eastern France should stay dry. By Saturday afternoon, the storms will have spread across central France, with northern and eastern France particularly badly hit. By Sunday afternoon, the worst of the storms will have passed, but the rain is predicted to hang around for a washout of a weekend for most of France.